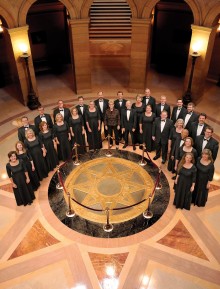 MINNEAPOLIS,
Minn. (January 26, 2012) — Every Minnesotan deserves a warm midwinter vacation.
VocalEssence, The Rose Ensemble and the University
of St. Thomas Chamber Singers will take
the audience on an exotic and wonderful trip with Música
de México. Join the
excursion on Friday, March 9 (8 pm) or Saturday, March 10 (8 pm) at Ted Mann
Concert Hall. The chorus members will
combine their voices to explore Mexico’s music of ancient times, the
Renaissance and today. Hear settings of traditional folk music along with music
of today’s contemporary Mexican composers — sung in Spanish and in Mexico’s
many indigenous languages. Tickets for Música de México are
$13.50-$43.50. For tickets and information, call 612-371-5656
or visit www.vocalessence.org/mexico2012.

Música de México is
an exploration of the colorful country through music — composed 400 years ago
and composed just today. It will be a marvelous concert for patrons new to the
music of Mexico, in addition to presenting something new for the well-traveled
music lover. The VocalEssence Ensemble
Singers, conducted by Philip
Brunelle, will perform a new work by 2012 ¡Cantaré! composer Rodrigo Cadet titled “Deseos.” They will
also perform “Aleluya, Alelú” by Sergio Cárdenas and “En Paz” by 2010 ¡Cantaré! composer Jesús López.
(Through the VocalEssence ¡Cantaré!
community engagement program, Mexican composers serve as composers-in-residence
with VocalEssence and area schools.)

The Rose Ensemble and their conductor Jordan Sramek will follow their tradition of singing music from the
earliest periods, performing music from four Mexican composers spanning the
16th (Bernardo de Peralta and Jerónimo de Aliseda), 17th (Gutiérrez de
Padilla), and 18th (Durán) centuries. The
Ensemble Singers and The Rose Ensemble will close the first half of the
concert with a Renaissance work by Francisco López, “Laudate Dominum,” for
double choir.

Appearing for the first
time on a VocalEssence concert, the University
of St. Thomas Chamber Singers, conducted by Angela Broeker, will sing the 20th century music of Guillermo
Alvarez, “La Señal,” and the premiere of a new work by Jorge Cozátl, also a 2012 ¡Cantaré! composer. The concert will conclude with a medley of Mexican folktunes in “Popurri a la
Mexicana,” arranged by ¡Cantaré! composer
Diana Syrse Valdés and featuring the remarkable sound of all three of the
choirs singing together.

The Oxford Times (UK)
has declared that the VocalEssence
Ensemble Singers “have a blend that could — and should — be the envy of
every choir in the business.” Founded in 1991, the Ensemble Singers are
acclaimed for their “superbly blended sound” (Birmingham Post, UK) and
“exemplary technique” (Minneapolis Star Tribune). Lauded by the Times
of London as “polished, bright and brilliantly balanced,” this 32-voice
professional chorus is directed by VocalEssence founder Philip Brunelle and
associate conductor Sigrid Johnson. Well-known to public radio listeners as the
“house choir” on A Prairie Home Companion, the VocalEssence Ensemble
Singers are featured on three CDs with Garrison Keillor: Over the River
& Through the Woods; Hymn to Potatoes (and other choral masterpieces from A
Prairie Home Companion); and last year’s Thanksgiving concert, Gratitude,
Gravy & Garrison. Music from
the North Star Tour is available on a brand new CD, From the Land of Sky
Blue Waters.

Founded in 1996 and based in Saint Paul, Minnesota, The Rose
Ensemble reawakens the ancient with vocal music that strives to stir the
emotions, challenge the mind, and lift the spirit. Each performance illuminates
centuries of rarely heard repertoire, bringing to modern audiences research
from the world’s manuscript libraries and fresh perspectives on history,
languages, politics, religion and world cultures and traditions. With nine
critically acclaimed recordings and a diverse selection of concert programs,
the group has thrilled audiences across the United States and Europe with
repertoire spanning 1,000 years and over 25 languages, including new research
in Hawaiian, Swedish, Middle Eastern and American vocal traditions.

The University of St. Thomas Chamber Singers is a select, mixed
ensemble of undergraduate students representing a number of major fields. Choir
members sing a broad variety of styles and genres including secular and sacred
music from all historical eras as well as choral works representing folk idioms
from around the world.  Every other year, the Chamber Singers combine with
the UST Concert Choir to perform a major choral/orchestral work with
professional orchestra.  Recent repertoire includes Requiems by Verdi and
Mozart, Mozart’s Mass in C minor, Brahms’s Ein deutsches Requiem,
Handel’s Messiah, and Haydn’s Missa in Illo Tempore.  The
choir tours locally, regionally, and internationally, having traveled to Greece
in 2009, Italy in 2006, Central Europe in 2003, and Spain in 2000.  The
UST Chamber Singers were selected to sing at the National ACDA conference in
2011, the Minnesota Collegiate Choral Festival in 2009, the North Central ACDA
Conference in 2008, the Minnesota Music Educators Association annual convention
in 2007 and 2001, and the American Choral Director’s Association of Minnesota
annual convention in 2004.

Called
“one of the irreplaceable music ensembles of our time” by Dana Gioia, past
chairman of the National Endowment for the Arts, VocalEssence was founded in 1969 by current Artistic Director
Philip Brunelle. Recognized internationally for its innovative exploration of
music for voices and instruments, the organization presents an engaging
collection of concerts featuring the 130-voice VocalEssence Chorus, the
professional 32-voice Ensemble Singers (well known for their appearances on the
internationally-distributed radio show A
Prairie Home Companion hosted by Garrison Keillor), guest soloists and
instrumentalists. In addition to championing lesser-known works of the past,
VocalEssence has an unwavering commitment to today’s composers resulting in
more than 130 world premieres. VocalEssence has released fourteen commercial
recordings, including four WITNESS CDs of music by African American composers
and artists available on the Clarion label.

¡Cantaré! is a unique program
designed to bring the talents of composers from Mexico directly into Minnesota
classrooms. Through ¡Cantaré!, selected composers from Mexico
participate as VocalEssence artists-in-residence with elementary schools, high
schools, colleges and community organizations. The composers work directly with
student choirs and community choruses throughout the year, becoming familiar
with the ensembles and writing new music specifically for each. At the end of
the school year, community and school partners present world premieres of new
music in concert. In 2011-2012, Mexican composers Jorge Cózatl and Rodrigo
Cadet are participating in residencies throughout the Twin Cities, writing
new music to premiere in concerts taking place in March and May 2012.