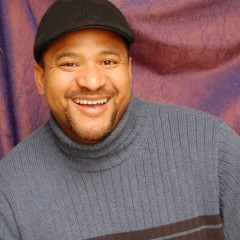 Timothy has received several awards as a composer including: Live Music for Dance award from the American Composer’s Forum, the Cultural Community Partnership grant, and winner in the Essentially Choral Competition for emerging American composers sponsored by VocalEssence and the American Composers Forum.  He has composed commissioned works for dance, choral, and church groups.  A former college football player, Timothy is on the Vocal Essence Witness Artist Roster, and as a clinician he has conducted workshops for drumming, choral music, and presentations in schools and universities on issues surrounding race, black culture, and race relations. Timothy has performed nationally as a singer, actor, and percussionist; including August Wilson’s Fences, and Black Nativity with Penumbra Theater, and La Boheme with the Minnesota Opera.  He has also performed with Grammy Award winner, Larnelle Harris.  Timothy has recorded music on a variety of CDs, from Gospel to Caribbean including his Soul Drums series, which stems from West African, Caribbean and African American music traditions.