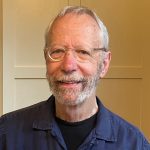 John Jensen received his music degrees in Southern California, where he attended Occidental College and University of Southern California.  While there he free-lanced as a studio musician, playing on the Andy Williams show and touring the country with prominent singers through Columbia Artists Management. He moved to Iowa and taught for 15 years at Grinnell College as an artist-in-residence. In 1990, John moved to St. Paul and has played with VocalEssence, the Minnesota Orchestra, and the St. Paul Chamber Orchestra. He plays jazz and classical piano around the area, including performances with the Bloomingtones, a traveling senior choir based in Bloomington, MN. In November 2022, John will appear with the Yale Symphony Orchestra at Yale University to play and record a piano concerto by the late Paul Reale, for Naxos records (to be released in 2023).