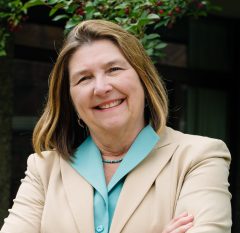 Mary Ann Aufderheide joined VocalEssence as managing director in 2003. Under her leadership she has firmly established the VocalEssence brand name as representing excellence in choral music and community engagement programs. During her tenure the organization has expanded its core of professional singers who tour regionally and internationally; released seven recordings on the Clarion label; expanded the WITNESS School Program and created ¡Cantaré!, a new exploration of the music of Mexican composers; and mounted a major festival celebrating the music of William Bolcom.

Before her move to Minnesota, she had served as the executive director of the Grammy Award-winning Phoenix Boys Choir since 1996. Her accomplishments with the Phoenix Boys Choir included managing an international search for a new artistic director, implementing an expanded cultural diversity program focused on the Latino community and founding an all- alumni Men’s Choir. During her tenure, a $1.2 million endowment fund was established. The Boys Choir received a Grammy Award for Best Choral Performance in 2001 for its recording of Penderecki’s Credo with the Oregon Bach Festival Choir under the direction of Helmuth Rilling.

Mary Ann served as general manager of the Mesa (Arizona) Symphony Orchestra and taught music in the public schools. In the early 1990s, she served as director of education for the Phoenix Symphony, coordinating programs to reach over 30,000 students annually through an innovative music video project, developing an open rehearsal program to introduce secondary students to commissioned composers and guest artists, and implementing a collaborative program bringing together the music of Native Americans and Western classical music.

A free-lance professional oboist and teacher, Mary Ann received a bachelor of fine arts in music education from Ohio University; master’s work has included studying music history and literature at Florida State University. At Stanford University, she participated in the inaugural class of the national Executive Nonprofit Leadership training program for arts administrators.

Mary Ann is active as a leader and mentor in the national choral music scene, serving as a regular member of Chorus America’s Choral Management Institute faculty. In 2007 and 2009 she served as a music panelist for the National Endowment for the Arts.