When: March 20-24
At: Cowles Center for Dance and the Performing Arts
Running Time: two and a half hours with intermish

About:
“A tale exploding with star-crossed lovers, melodramatic villains, broad comedy, and a beautiful score, Candide combines the power of opera with the delights of musical theatre. Wrapped in irony, this musical follows the optimistic young Candide in search of “the best of all possible worlds” on an extraordinary journey to reunite with his soulmate. An all-star cast will be joined by a full orchestra and a chorus of sixty–the perfect way to savor the epic beauty of Bernstein’s remarkable score.” 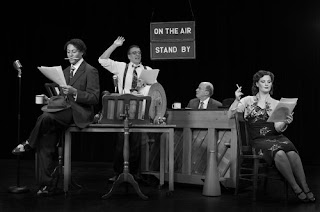 Candide includes some of Leonard Bernstein’s most memorable music, including the familiar overture, which serves as the theme for PBS’s “Live from Lincoln Center.”

The book has been revised numerous times since the original 1956 version written by Lillian Hellman. Theater Latte Da and VocalEssence use the Royal National Theatre Version of the play, performed in what the program calls a “theatrical concert version.”

Director Peter Rothstein stages the concert as a 1930s radio show, complete with live sound effects. Who knew that opera singers were also adept at playing sheep and seagulls? The always-terrific Bradley Greenwald is the radio announcer, plays Doctor Pangloss, and creates many of the sound effects, with the assistance of Andrew Alness. His narration helps to move the action along and keep track of the characters, while providing a great deal of humor. 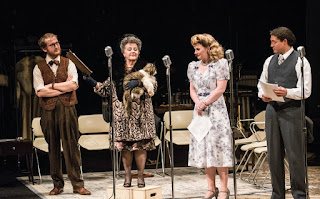 Phinehas Bynam plays Candide with a lovely innocence and a beautiful voice. Elizabeth Hawkinson is a snappy Paquette. Rodolfo Nieto plays Maximillian and other roles, and it’s a rare opportunity to see him play something a little goofy.

All of the voices are great, but Liv Redpath is especially notable as Cunegonde, nailing the challenging “Glitter and Be Gay.” (Sarah DeYong sings the role on March 24.) Susan Hofflander is fun to watch as well as listen to as the Old Woman. G. Phillip Shoultz, III and Michael Fairbairn play a great number of other characters. The cast wear terrific period costumes by Aaron Chvatal, with wigs and hair by Paul Bigot that add to the 1930s flair.

The VocalEssence Ensemble Singers and Chamber Chorus, about 60 voices strong, occupy risers upstage, and not only contribute beautiful music, but are called into service for crowd sounds and occasional action, all of which they do with great energy. The chamber orchestra, just 14 members, provide excellent accompaniment.

The combined talents of the soloists, chorus, and orchestra show off the beauty of Bernstein’s music. When the chorus sang “Make Our Garden Grow,” I just wanted them to sing it forever. This is a beautiful musical and theatrical evening, but sadly a short run that sold out a month before the show. Hopefully the popularity of this performance will lead to future collaborations between VocalEssence and Latte Da!