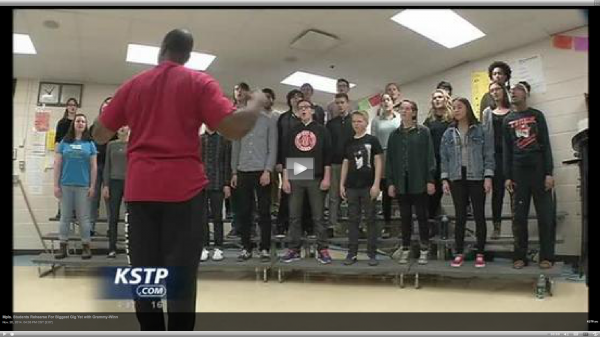 Students at South High School in Minneapolis are preparing Thursday for a performance they probably won’t forget. Members of the school’s varsity choir program are partnering with Grammy award winning musicians to sing this February.

The first lesson these teenagers need before their biggest gig yet is to relax, then release.

“The music is already inside of them. It’s my job to bring it out of them,” said Greg Hines, The Sounds of Blackness musical director.

Three-time Grammy winning group “The Sounds of Blackness” will share the stage at their Feb. 8 performance with the crew of novice singers/students.

But as the group’s director, Hines says the song has a message for the choir.

“Don’t worry about a thing,” the choir sings.

Hines is teaching about more than just pitch and posture, he says the history of this spiritual music needs to be shared during Black History Month.

“We bring the music from the African American experience to people of all backgrounds, particularly our youth and with our messages of inspiration and motivation,” Hines said.

At Orchestra Hall, the varsity choir will have to get used to an audience of triple the crowd they are used to, as well as quadruple the number of performers they’re used to on the stage. But students say they expect the performance will help their confidence levels soar exponentially.

“The nervousness that I’ll feel before, that will make it less nervous when I have smaller crowds,” Bates said.

Rehearsing for the performance called “Witness – Let Freedom Ring,” will train the students’ voices to ring out beyond a classroom and fill a concert hall.

Minneapolis-based group VocalEssence will also collaborate on this February performance at Orchestra Hall.