One more welcome sign of spring:  Minnesota choirs are emerging from hibernation. 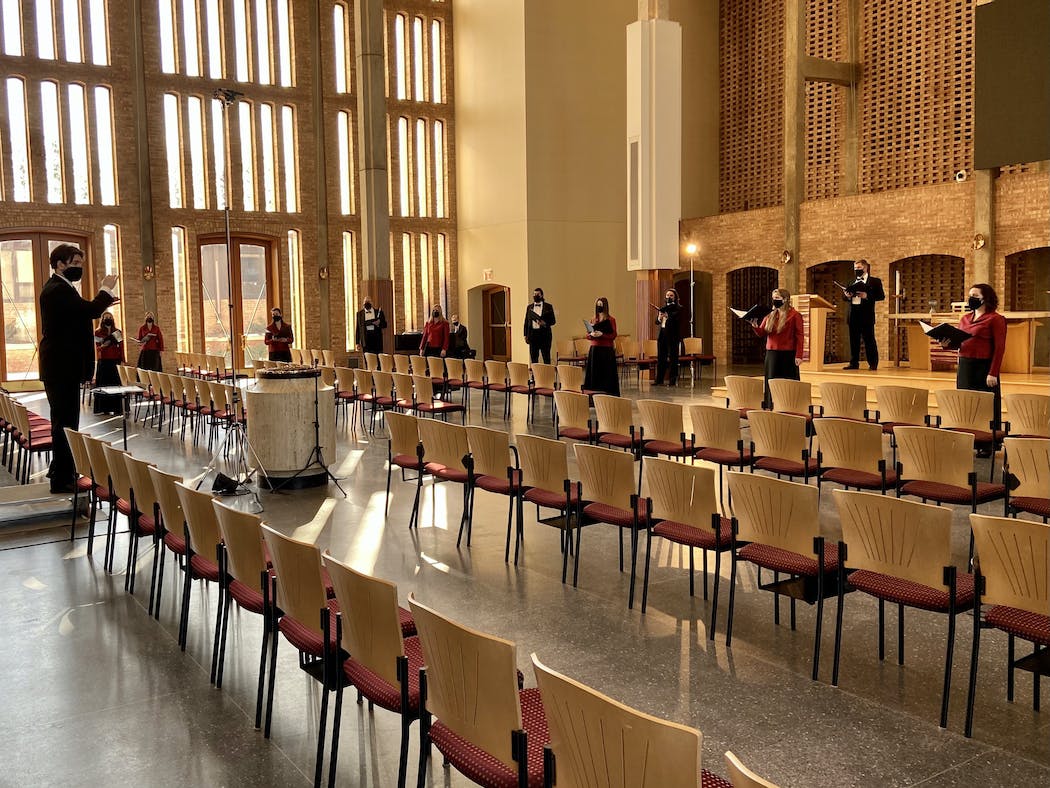 For a state dubbed “The Land of 10,000 Choirs,” the pandemic has been particularly painful. Joining voices was declared a potential “super spreader” activity after some outbreaks were traced to choir rehearsals.

But Minnesota singers soon were conspiring to find ways to harmonize. Gathering in an airplane hangar for optimal social distancing. Smelling scented candles on their way into rehearsal to check for COVID symptoms. Singing into their phones and being spliced into a “virtual choir.”

Now spring is here, the pandemic’s end seems increasingly near and several choirs are emerging to perform online concerts.

“There is something that happens when a group of people come together and sing,” said soprano Katherine Castille of the National Lutheran Choir. “Something not just physical, like heartbeats syncing, but also something mysterious, perhaps sacred.”

Here are some of the concerts you can catch online — some free, some ticketed, all with donations appreciated.

The choir used sprawling venues (including that hangar) and large churches like the Cathedral of St. Paul to gather in groups of four to 12. Their performances were edited together into a program titled “Hope Lives,” now available at nlca.com.

“The entire globe is in a state of hope right now after 12 very dark months,” noted artistic director David Cherwien.

The program will include hymns, and “folks can join in singing since we provide text and music on the screen,” he said. “We are also joined by the Keith Hampton Singers, a Chicago-area gospel choir that really brings an element of celebration.”

Its YouTube channel has a new program, “Heaven and Earth Be One.” Artistic director Dwight Jilek said the title “comes from Elaine Hagenberg’s arrangement of the hymn ‘This Is My Father’s World,’ and proclaims that we must not be satisfied until all people are safe and are valued.”

Jilek said that small groups of his singers “have been elated to rehearse together in person, despite strict mitigations: temperature and symptom checks, frequent hand sanitizing, and a candle smell test when arriving at rehearsals for all staff and singers. Also 10-feet-plus between singers, and double masking.”

The program features six pieces from pre-pandemic concerts and six new ones that the choir began working on in mid-February.

“When I sing with Magnum Chorum, I’m fully present — mind, body and spirit,” said soprano Karen Lutgen. “The thoughts and anxieties that are pervasive these days disappear for a while. The musical break from the stresses of this time is life-giving.”

While its concert season has been entirely gleaned from past performances, the choir’s annual program “My Soul’s Repose” — available March 19-21 at singersmca.org — is particularly recommended for anyone who’s lost a loved one in the past year.

It’s designed to offer comfort and solace, doing so with the aid of such pieces as a choral setting of Samuel Barber’s “Adagio for Strings” (“Agnus Dei”), Jake Runestad’s “And So I Go On,” and Maurice Duruflé’s “Ubi caritas.”

Its new program “Carry On,” viewable March 27 at tcgmc.org, was inspired by a virtual visitor last summer.

“[Singer-songwriter] Ann Hampton Callaway joined our Zoom rehearsal,” said artistic director Gerald Gurss. “She sang this song to us, ‘Carry On,’ as a way to encourage us to wade through the muck of distant music making. Welled with emotion, I asked her if I could arrange the song for our chorus, and she graciously said yes. ‘Even when hopes are few, we know we’ll get through. With love to share, we will carry on.’ ”

Members still haven’t been able to sing together. “Singing solo into our phones and computers, waiting weeks or months to hear the combined results, isn’t for everyone,” said second tenor Erik Anderson. “For me, there’s a ‘keeping the lights on’ aspect that’s crucial: I’ll do whatever I can to keep contributing, and keep our organization singing, to ensure it’s still here when it’s safe to sing together again.”

The group has been able to record in a variety of locations, said artistic director Philip Brunelle: “The Orchestra Hall atrium, James J. Hill mansion, the IDS Crystal Court and Plymouth Congregational Church. Besides finding a good venue sound-wise, it is important to have a setting that is conducive to interesting cinematography.”

Anna George Meek, an alto in the group, stressed how crucial it is to sing together: “A good choir is many individuals forming the body of a single instrument. I know how the singers who stand near me breathe, I know the textures of their voices, I know where to support their tone, and where to let them support mine.”

“Because the theme is Minnesota, it was perfect to invite Minnesota’s first lady, Gwen Walz, to offer some thoughts about the importance of the arts in Minnesota,” Brunelle said. “Both the composers and poets featured offer a broad range of voices — a real melting pot of sounds.”

While the Minnesota Orchestra’s choir of choice hasn’t gathered in person since COVID arrived, it has mentored younger choirs from Minneapolis Community & Technical College and Roosevelt and South high schools via its “Bridges” program.

“If you had asked me a year ago what comes to mind when asked about the word ‘bridge,’ I would have talked about the noun form,” Meyers said. “Now it’s the verb, or active, form of the word. I now am thinking of how I can be a bridge rather than use a bridge.

“I am challenging myself daily with creating intentional ways in which I can reach out to connect with those I care about, sustain relationships, and offer my time and treasures in new ways.”