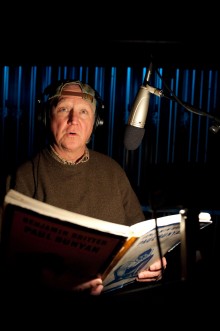 By Rob Hubbard, Special to the Pioneer Press
Posted:

The legend of the lumberjack giant, Paul Bunyan, is so indelibly
stitched into the mythology of Minnesota that most state residents would
likely be surprised to find him the subject of an English opera. During
a stay in America during World War II, Benjamin Britten took a cue from
friend Aaron Copland’s “Billy the Kid” and decided to create something
that conveyed the wide-open vistas and possibilities found on this side
of the Atlantic.

So he and poet W.H. Auden teamed up to write “Paul Bunyan,”
Britten’s first foray into the operatic form, premiering it four years
before “Peter Grimes” really put Britten on the map. And what better way
for Minnesotans to mark the 100th anniversary of Britten’s birth than
with a production of “Paul Bunyan,” presented by VocalEssence, which has
returned to the work a few times over the course of its 44-year
history?

On Friday night, April 26, VocalEssence offered the first of two
performances of the opera at Minneapolis’ Ted Mann Concert Hall. It’s a
semi-staged version that sometimes comes up a little too shy of “semi-,”
seeming more concert than opera, but, musically, it’s impeccably
executed, the soloists, chorus and orchestra all capturing wonderfully
what’s unique and powerful about Britten’s style.

If you expect a compendium of the many tall tales about the
Northwoods giant, you should know that Britten and Auden were less
interested in spinning yarns than in capturing a sense of the grandeur
of our continent’s expansive interior. There’s actually more plot to be found in the
intermittent tunes delivered by local folkie Pop Wagner, who strums his
way through Bunyan’s birth, childhood, courtship, marriage and becoming a
father and widow. The rest of the opera is a chronicle of lumber camp
life, from hiring of staff to the food they eat to budding romance to
the lives of its pets. It may sound mundane, but it all hangs together
quite well under Philip Brunelle’s detail-oriented conducting.

Bunyan himself is actually invisible to the audience, the characters
addressing him as if he were a colossus leaning against the back
balcony. His voice is supplied by retired TV news anchor Don Shelby,
who, alas, intones everything the giant says with unvarying gravitas and
weighty import. But there are a number of impressive performances
elsewhere, like Robb Asklof as the cook who courts Paul’s daughter,
Angela Grundstad as a simpatico pooch with a stratospheric soprano, and
Seth Keeton as a burly bass of a farmer. But the whole cast and chorus
make for enjoyable company.

What: VocalEssence’s production of “Paul Bunyan” by Benjamin Britten

Capsule: It could be more theatrical, but it’s musically unimpeachable.