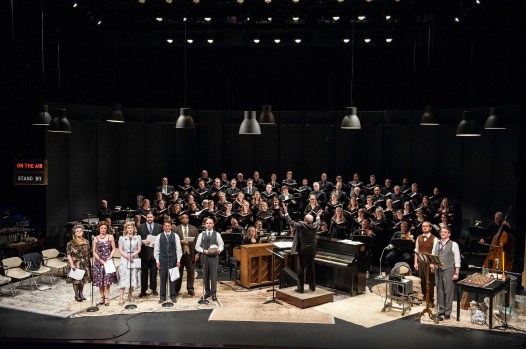 For certain theater people, searching for a really good production of “Candide” is like trying to find the mythical Shangri La or Eldorado. For these people, the “Candide” playing an unfortunately short and even more unfortunately sold-out run at the Cowles Center is the “Candide” we’ve been waiting for.

The Leonard Bernstein / Richard Wilbur musical has been glorious but problematic since its Broadway premiere in 1956. The score — which ranges from polkas and tangos to coloratura arias and Gilbert-and-Sullivan-esque riffs — leans more heavily toward opera than it does to musical theater. It favors performers with a rare mix of classically trained vocal chops and Broadway-quality acting skills.

The script — based on Voltaire’s satiric 18th century novel — has been reworked countless times, as various adaptors have tried to make stagable a plot that veers from a pastoral German village to Holland to Portugal to South America to Eldorado to Surinam to … well, you get the idea.

When producers aren’t throwing money at the show’s challenges — as they did in “Candide’s” last Broadway production in 1997 — the show typically tends to be realized either as a stripped-down chamber version or an orchestral semi-staged concert. The current Twin Cities production — a collaboration between Theater Latte Da and VocalEssence — steers an intriguing and ingenious middle course.

Under the stage direction of Latte Da’s Peter Rothstein, this “Candide” is rendered as a 1930s radio production by the “Theatre of Enlightenment on the Air.” Bradley Greenwald emcees the proceedings as a narrator describing the action and steps into the show as Dr. Pangloss, the relentlessly optimistic tutor who instructs his young charges that everything is for the best in “this best of all possible worlds.”

Greenwald and a “gofer” (the hard working Andrew Alness) create a soundscape for the proceedings, aural images of everything from ships sailing (a pillow case flapped) to necks breaking (celery snapped).

When the principal artists aren’t standing behind old-fashioned microphones performing, they sit off to the side, perusing  newspapers, penning crossword puzzles or just killing time. Behind them are a suite of musicians and a couple score of VocalEssence singers under the baton of Philip Brunelle.

It all works remarkably well, beginning with an overture so popular that it has become an orchestral staple in its own right. The 14-piece ensemble is the perfect size to convey both the intimacy and the playful mastery of the piece. In the acoustically warm Cowles Center, it’s possible to discern an individual trill of a flute, murmur of an oboe, flare of a trumpet.

Rodolfo Nieto plays a narcissistic sibling with a baritone swagger; Susan Hofflander’s Old Lady may have to stand on a box to reach the microphone, but get out of the way when she sings the tango. Elizabeth Hawkinson is the gamely saucy servant Paquette and occasionally a well-tuned seagull. With a sometimes-sweet, sometimes sardonic humor Greenwald is the glue that holds the show together vocally, thematically and performance-wise.

The VocalEssence singers fill in the soundscape as terrorized villagers, choral commentators and the like. When they join forces with the leading players for the show’s finale, the a cappella section of “Make Our Garden” grow is spine-tinglingly moving.  Their presence fills out and rounds out a truly memorable evening.