Review: VocalEssence’s ‘Welcome Christmas’ best when ringing in the new 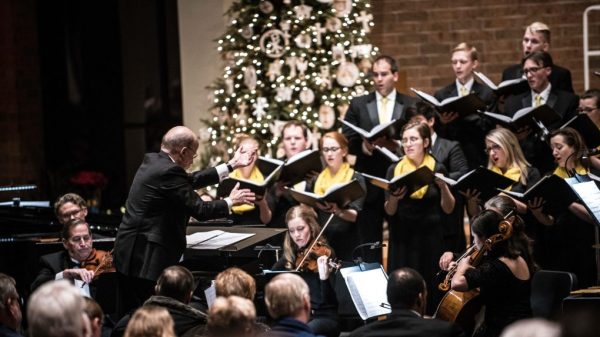 By Rob Hubbard | Special to the Pioneer Press

It never gets old. Such could be said of the repertoire at VocalEssence’s annual “Welcome Christmas” concerts. If you want to hear a choir singing familiar carols at this time of year, you’d best look elsewhere, for this Minneapolis-based choral organization is far more interested in expanding musical horizons and introducing new holiday-flavored works through commissions and premieres.

At first blush, it looked as if the 2018 edition of “Welcome Christmas” would be an exception, for VocalEssence is celebrating its 50th season by getting nostalgic with works it’s debuted since conductor Philip Brunelle founded it in 1969. Ah, but there were still five world premieres on the program at Apple Valley’s Shepherd of the Valley Lutheran Church on Saturday night, so those who braved the snowy roads were rewarded with the first taste of some fresh music.

And rewarding it was, for three of those pieces were the highlights of the evening, giving voice to the exciting visions of three composers. While carols are often designed to deliver sweet spiritual salve — and there was plenty of that to be found at this concert — new works by Nico Muhly, Shruthi Rajasekar and Stephen Shewan proved more emotionally and musically complex than a simple “Silent Night.”

For those seeking more of a “greatest hits” program, be assured that the concert is also loaded with pieces premiered by VocalEssence between 1972 and 2014. Brunelle and company have long held twin allegiances to Minnesota and England, and there are a half-dozen pieces from each at these concerts, with a touch of Mexico and a healthy dose of other American composers.

Among them, the strongest impression was created by Nico Muhly’s “The Faire Starre,” a fascinating 21-minute work that takes the familiar tale of Jesus’ birth in unexpected directions, both lyrically and musically. At either end are settings of poems by 17th-century English poets Thomas Traherne and Richard Crashaw, but it’s the extended center section — employing the lyrics of a 15th-century Christmas lullaby in Olde English — that proved most captivating, finding the baby Jesus engaged in an imagined dialogue with his mother.

Muhly makes haunting use of Dave Hagedorn’s multiple percussion instruments, the held high notes of soprano Mari Scott while all around her fall away, and the Ensemble Singers’ ghostly, whispering echoes. The work’s finale is a sweeping series of converging phrases reminiscent of one of Muhly’s mentors, Philip Glass, yet bearing a style all his own.

Far earlier in her career is Wayzata-raised composer Shruthi Rajasekar, who employs harmonic progressions from India’s Carnatic tradition in her “Jayjaykar,” a refreshing departure from the Eurocentric stylings filling most of the program. And the third standout was one of the winners of this year’s Carol Contest, which asked composers to write for oboe and choir. Stephen Shewan’s “The Little Cradle Rocks Tonight” made Michael Dayton’s oboe seem like a lone voice crying out over a barren winter landscape.

Soprano Scott was also excellent on the concert’s oldest work, a movement from Ian Kellam’s 1972 cantata, “The Joly Shepherd.” The concert was bookended by engrossing early-‘80s pieces from the pens of Libby Larsen and Stephen Paulus, but the loveliest moment came on a work by another Minnesotan, Daniel Kantor, whose “Night of Silence” invites the audience into its sweet reverie by singing “Silent Night” as a descant to Kantor’s melody. For those seeking the comfort of the familiar, it was the quintessence of warmth.

Capsule: The musical ghosts of Christmas past are upstaged by some exciting premieres.