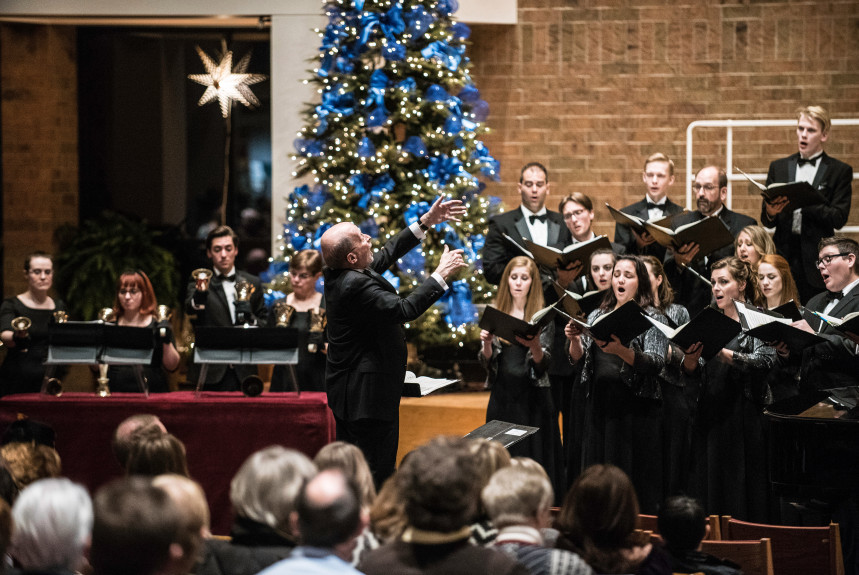 When the Minnesota Orchestra and St. Paul Chamber Orchestra were both announced as Grammy nominees last week, it served as a reminder that the Twin Cities area is a great place to live if you’re a classical music lover. But, in addition to having outstanding interpreters of traditional repertoire, our metropolis has also evolved into a capital for composers.

Be it orchestral, opera, choral or chamber music, rare is the week when a new piece by a Minnesota-based composer isn’t being premiered somewhere. We have a thriving composing community and — if you’d like to experience a tasty sampler of what it’s creating in the choral realm — may I recommend this year’s VocalEssence “Welcome Christmas” concerts?

While these annual performances by conductor Philip Brunelle’s Minneapolis-based choral powerhouse have sometimes seemed to meander musically — the lone link between works being the theme of Christmas — this year’s edition is all about celebrating the plethora of homegrown composing talent that’s emerged over the past few decades.

On Saturday night at Apple Valley’s Shepherd of the Valley Lutheran Church, Brunelle and associate conductor G. Phillip Shoultz III led the VocalEssence Chorus and its smaller chamber choir, the Ensemble Singers, in the most satisfying “Welcome Christmas” concert of recent memory, one that displayed the talents of 15 Minnesota composers through several superbly executed interpretations. Be those composers crafting something new or putting their own stamp on an older song of the season, it was a very rewarding harmonic convergence of talents.

While the choir entered the church’s sanctuary singing something by the dean of local composers, Dominick Argento, and followed it with a piece by Stephen Paulus, the highlight of the concert’s first half was Abbie Betinis’ dark and deeply absorbing arrangement of Gustav Holst’s “In the Bleak Midwinter.” A troubled urgency coursed through the piece, a sense of foreboding bubbling beneath the high harmonies and lovely soprano solo by JoAnna Johnson. Also impressive was a full yet gentle take on the rich harmonic palette of Cary John Franklin’s “A Carol.”

Yet the concert’s second half was the stronger, beginning with Libby Larsen’s 1983 work, “Ringeltanze,” a collection of five carols for which the Ensemble Singers were joined by a handbell septet. Full of emotional contrast, it offered the evening’s lone opportunity for a relatively lengthy musical excursion, and it was an involving one. On its heels came Daniel Kallman’s very pretty arrangement of “Infant Holy, Infant Lowly,” a work rivaled in its contemplative spirit and mesmerizing vocal textures by Timothy Takach’s “Winter Walk” and Daniel Kantor’s new audience-participation quodlibet, “Child of Light.”

Rather than climaxing with some ebulliently celebratory sing-alongs (as VocalEssence often has in years past), Brunelle and the full complement of singers chose to instead land in a soft place, with Paul Manz’s 1953 staple of the choral repertoire, “E’en So, Lord Jesus, Quickly Come.” The most familiar work on the program, it had the feeling of a reunion with a beloved old friend. It was a fitting tribute to a composer who helped blaze a trail for all of the Minnesota composers behind him.