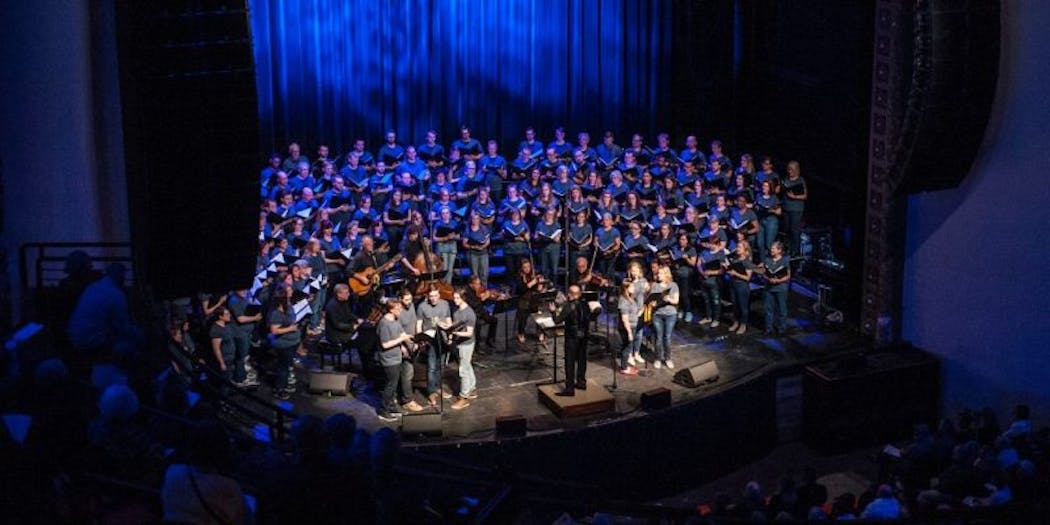 VOCALESSENCE
VocalEssence’s “Bob Dylan Revisited” Tour will include the choir, accompanied by a string quintet and piano.

Well, if you’re traveling in the north country fair

Where the winds hit heavy on the borderline

Remember me to one who lives there

She once was a true love of mine.

Hey, “Girl From the North Country,” VocalEssence is coming by to send Bob Dylan’s regards.

The choirs of VocalEssence — which hail from Minneapolis, where Dylan first lived after leaving the northern city of Hibbing — will be bringing Dylan’s music to the North Country this week. Conductor Philip Brunelle and the choir will be traveling to Detroit Lakes and Grand Rapids, on the edge of the Iron Range that spawned the Nobel Laureate bard of American folk and rock.

The inspiration for bringing it all back home to Dylan’s area of origin is the choral oratorio, “The Times They Are a-Changin’.” For the concert-length work, Pittsburgh composer Steve Hackman arranged enough Dylan songs to fill out the set list on one of his “never-ending tour” concerts.

“People think about Dylan’s music as solo,” Brunelle said from his office at Minneapolis’ Plymouth Congregational Church. “Here it is with choir and accompanied by a string quintet and piano, so I’m sure people think upon first hearing of it: Could it possibly work?

“And it works wonderfully. Hackman has a real gift for how to make the music feel very much in the style of … You’re not going to try to sound like Bob Dylan, but you can feel the emotions of the various songs come through with the way he’s done it chorally.”

VocalEssence first brought the piece to Minnesota with a very well-received concert in 2019 at St. Paul’s Palace Theatre.

“I remember at that performance, there were people who came to me afterward and said, ‘Y’know, we came doubting that a choral version of Dylan would work. We came waiting for you to prove it. And you did. It works,'” Brunelle said.

“I think the audiences will find that to be true. What I still remember is that, as some of these songs start, you’d hear people humming with it out in the audience. Or a piece would start and you’d hear, ‘Ahhhh’ or ‘Oh, yes.'”

Most of the 13 songs in Hackman’s piece were originally penned in the 1960s, when Dylan emerged as “the voice of a generation” but soon eschewed many conventions of the American folk scene and invented “folk-rock.” In retrospect, it was no surprise when you consider that he’s said a Duluth performance by Buddy Holly was a life-changing experience for him, noting in his Hibbing High School yearbook that he wanted to play with Little Richard.

The songs rooted in rock can be especially tough for a choir.

“Some of the fast ones are really challenging,” Brunelle said. “To do things like ‘Subterranean Homesick Blues.’ Oh, my word. We’re getting everyone right together, getting those words right on the rhythmic pulse, as you need to. ‘Tangled Up in Blue’ is another one, again with a lot of text. And, speaking of a lot of text, ‘A Hard Rain’s a-Gonna Fall’ needs a lot of pacing. Otherwise, you get too big too soon and then where do you go?”

I had a job in the great north woods,

Working as a cook for a spell.

But I never did like it all that much,

And one day the ax just fell.

VocalEssence planned to tour this concert-length oratorio of sorts at several locations in Minnesota in 2020 with the help of a Minnesota State Arts Board grant, but COVID intervened. Now the delay is over, with local high school choirs acting as warm-up acts for each of the concerts. And the group isn’t just heading north.

Four weeks later, VocalEssence will bring the music closer to the Twin Cities, traveling down Hwy. 61 to Red Wing, a town name-checked in a 1963 Dylan song, “Walls of Red Wing,” about life inside the nearby juvenile detention center. The Sheldon Theatre hosting the concert is a lovely 1904 venue.

After being away from the work for three years, has Brunelle come to view it differently?

“To me, it was like returning to an old friend,” he said. “And the singers feel the same way. I think a lot of audience members will feel that way about these songs.”