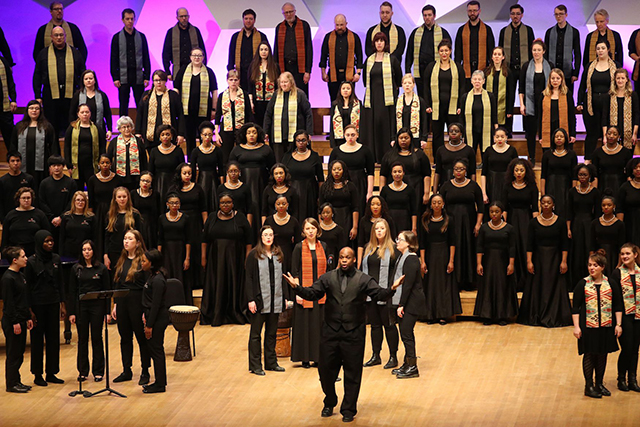 VocalEssence was born in 1969 as the Plymouth Church Music Series. Just another concert series at a local church, founded by an ambitious, tireless and hypercreative choir director and organist named Philip Brunelle. In 2002, the Plymouth Music Series became VocalEssence. Today, Brunelle and his singers are internationally known, their list of accomplishments, firsts and accolades longer than Brunelle’s arm plus his conductor’s baton. When the Rolling Stones came to town and needed a choir, guess who got the call?

VocalEssence has been celebrating its 50th anniversary since last summer. Meanwhile, it has also been ramping up for the 30th anniversary of its signature Witness program, which honors the contributions of African-Americans to the arts. Last Sunday’s annual Witness concert, at Orchestra Hall, drew an enthusiastic crowd. The theme of the 2019-20 VocalEssence season, announced at the concert, is “Be a Witness,” calling on us all not only to see, but to testify. The season will include two Witness concerts instead of the usual one, because you can’t have too much of a roof-raising good thing.

The new season’s first concert will be “Divine Light” on Oct. 13 at the Summit Center for Arts and Innovation, a century-old former church. The music will include Ligeti’s “Lux Aeterna,” and SPCO assistant concertmaster Ruggero Allifranchini will join the singers. The first Witness concert will take place on Nov. 17 at St. Andrew’s Lutheran church in Mahtomedi, with the Midwest premiere of a new gospel mass by Dr. André Thomas.

Following VE’s usual holiday marathon – four “Welcome Christmas” concerts, this year including a newly commissioned suite of Norwegian carols by Grammy-nominated Norwegian composer Kim André Arnesen – the second Witness concert will be held at Orchestra Hall on Feb. 23, 2020, with the world premiere of a new work by Atlanta-based composer Joel Thompson and Billboard gospel chart-topper Jovonta Patton among the guests.

On April 4, VE will celebrate the music of the Mendelssohns – not only Felix but his sister Fanny, too, who wrote hundreds of pieces of music and was just as talented as her brother. The season will also include a movie sing-along, community sings, tours of Worthington, Morris and St. Cloud, events for families and kids, and the annual Cantaré concert, continuing VE’s longstanding relationship with the music and composers of Mexico.

Tonight (Thursday, Feb. 28) at Roseville Library: William D. Green, “The Children of Lincoln,” The Augsburg University history professor, award-winning author and VP of the Minnesota Historical Society will discuss and sign his new book about four “children of Lincoln” – what Frederick Douglass called white people – who helped secure the rights of African-Americans during the Civil War, then abandoned the fight during Reconstruction. Turning to other causes once emancipation became the law of the land, they were part of the nation’s retreat from equality. This event is part of the Ramsey County Historical Society’s History Revealed series. 7 p.m. Free.

Friday and Saturday at Minneapolis Community and Technical College, aka Minneapolis College: “From Behind the Sun.” In the spring of 1956, the Kippers, a black family, moved to a home on the 4500 block of Oakland Ave. S., then an all-white, redlined Minneapolis neighborhood. Playwright Stanley Kipper’s latest is based on his own experiences as the son of Obie Kipper, a postal worker, and Mary Kipper, a teacher, who wanted a better life for their family. A member of the Playwrights’ Center, Kipper co-wrote the play with Laura Drake. It was co-produced by Minneapolis Community and Technical College and Metro State University. 7 p.m. Friday, 1 p.m. Saturday at the Whitney Fine Arts Center on the Minneapolis College campus, 1424 Yale Place on Loring Park. Free, but please bring a non-perishable food item to donate.

Now on your streaming device: “Jim Crow of the North.” On the topic of redlining, Twin Cities PBSrecently released this new local documentary that examines its beginnings in the early 1900s. You can watch the full episode here. It also airs tonight (Thursday, Feb. 28) at 8 p.m. and early Friday morning at 2 on TPT Life. TPT’s Minnesota Experience web page is a gateway to numerous excellent documentaries about our shared past.

Friday and Saturday at the O’Shaughnessy: “For the Love of Will.” Out on a Limb Dance Theater Company has joined forces with New York rapper Devon Glover for an intriguing original production. As the Sonnet Man, Glover creates hip-hop Shakespeare fusion, setting the Bard, the original rhymesayer, to beats, then adding his own interpretations. “For the Love of Will” merges Glover’s score and Shakespeare’s words with a modern story, told through dance theater, of a young couple in love and how technology influences their relationship.  7 p.m. Friday, 2 p.m. Saturday, FMI and tickets ($28/23).

Saturday and Sunday at Northrop: The Joffrey Ballet: “Anna Karenina.” This new production choreographed by Yuri Possokhov, a former dancer with the Bolshoi and San Francisco ballets, just had its world premiere in Chicago, where the Chicago Tribune called it a “21st century classic” and tossed in words like “masterpiece,” “dazzling” and “jaw-dropping.” The Auditorium Theatre at Roosevelt University was “jam-packed.” We’re at least as smart as Chicago, aren’t we? Ilya Demutsky’s original score will be performed by a live orchestra – another reason to go. 7:30 p.m. Saturday, 2 p.m. Sunday. FMI and tickets($30-75).