VocalEssence founder networked his way to global greatness over 50 years 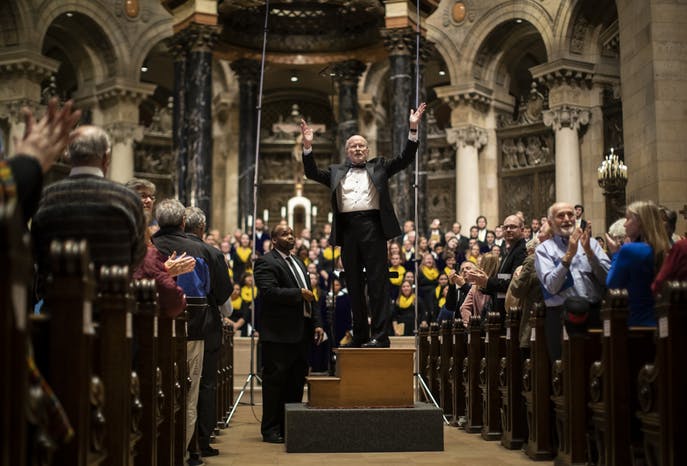 With no track record to his name, Philip Brunelle invited Aaron Copland, the great American composer, to attend a concert of Copland’s seldom-performed choral music in Minneapolis. The composer said yes. That was 50 years ago.

Brunelle cold-called Dave Mona, the great Minnesota mover-and-shaker, to ask him to join the board of directors of Brunelle’s choir. Mona said yes. That was about 18 years ago.

Brunelle pitched the transition team for Tim Walz, Minnesota’s new governor, to let him conduct the Legislature in a singalong of “America the Beautiful” and “My Country ’Tis of Thee” on the opening day of the session because “singing is a way to bring people together.” The answer was no. That was early this month.

Now, after all that asking, Brunelle is internationally known, one of the most formidable names in the choral world.

He organized a world choral festival staged in Minnesota, commissions big names such as “it” composer Nico Muhly to write for VocalEssence, convinces even bigger names such as actor James Earl Jones and ABBA’s Benny Andersson to appear in the Twin Cities and accommodates requests for his choir to accompany superstars such as Josh Groban and the Rolling Stones. Brunelle has received awards from Hungary, Sweden, Norway and Mexico, as well as an honorary Order of the British Empire and five honorary doctorates from Minnesota colleges and universities.

“He might be a candidate for the Mount Rushmore of Minnesota,” said Mona, who has been president of the VocalEssence board for 12 years even though he’d never seen the group until Brunelle solicited him.

Or as Twin Cities soprano Maria Jette put it: “Philip’s kind of the big daddy of the choral world here.”

Brunelle has more energy than his seven grandkids combined. He sleeps four or five hours a night and downs eight to 10 cups of coffee a day. He gets up at dawn to run 3 or 4 miles, then juggles meetings, musical preparation, rehearsals, phone calls, international travel — and finds time to write thank you notes, read cover-to-cover for his monthly book club of 30 years and plan special birthdays for each of his grandkids. And he does it all with a sparkle in his eyes on a face that’s as expressive as a screen full of emoji.

“I actually stopped running this fall,” Brunelle said with a smile but no apology. “I turned 75. My workout now is that I’m very active. I’m always on my feet. I’m moving around a lot.”

No fear of rejection

Founder and artistic director Brunelle boasts that VocalEssence, formerly known as the Plymouth Music Series, is the rare Minnesota arts organization never to have experienced a deficit. Its annual budget is about $2 million, with a staff of nine, 32 Ensemble singers who receive a stipend and 130 volunteer Choir singers. Not to mention the VocalEssence Singers of This Age for high school students and the VocalEssence Cantaré program, which connects a choir of all ages with Mexican composers.

As someone who has raised money to commission more than 300 works and accrue an endowment of $4.5 million, Brunelle knows how to close a deal.

As he did at a recent VocalEssence rehearsal, he’s fond of telling his own personal story. About how when he was 13, his minister father died of a heart attack on Christmas Day in front of the family. His mother, who had five children ages 11 months to 15 years, said she had “no idea how this will work but it will be an adventure and God will provide.” Philip’s piano teacher offered to give him free lessons as long as Mrs. Brunelle didn’t tell her son.

The maestro then talked to the singers about the importance of mentoring and tithing — giving to any organization, not necessarily a religious one — and then asked for a donation to VocalEssence if you’re so inclined. After all, only 15 percent of the group’s budget comes from ticket sales, so fundraising is essential.

Brunelle does not fear rejection. He’s always positive but hardly Pollyanna. He can work a room with the speed and smoothness of the most practiced politician. For instance, before dessert was served at VocalEssence’s 50th anniversary gala dinner last fall at Landmark Center in St. Paul, he moved from table to table, thanking each and every guest — all 200 of them.

Never bashful, Brunelle will let the world know of all the proud accomplishments of VocalEssence — even if he has to write a letter to the Star Tribune to garner headlines, as he did in September to tout the group’s recent trip to Mexico. In 2018, he also traveled to Tanzania, Uganda, Estonia and Sweden, plus several U.S. cities.

Born in Faribault, boy soprano Philip started singing at age 3, shining on “The Holy City” in church and at nursing homes. The precocious music lover began piano lessons at 4. A couple of years later, after hearing Handel’s “Messiah” performed at Austin High School, he asked for the sheet music of that piece for Christmas. At age 8, a year after moving to Minneapolis, he won a talent show on WCCO Radio, singing, of course, “The Holy City.” He soon added organ and then percussion to his repertoire after a visitor from Ecuador introduced him to the marimba.

Clearly a career in music beckoned. As a sophomore music student at the University of Minnesota, Brunelle landed a plum job as percussionist with the Minneapolis Symphony Orchestra (now the Minnesota Orchestra), skipping some classes to attend rehearsals. He eventually annexed piano to his responsibilities with the orchestra, working with such giants as Igor Stravinsky and opera legend Beverly Sills.

But, despite the responsibilities for a young family with three kids, Brunelle left the orchestra after five years because “I wanted to be a conductor.” He not only became musical director of Center Opera (now Minnesota Opera), but also choirmaster and organist at Plymouth Congregational Church, two duties he still holds. And that same year, he started what became VocalEssence by calling Copland to help make a first-season splash.

Eye for the absurd

“Philip Brunelle is an encyclopedia of music,” said Bobby McFerrin, the Grammy-winning singer/conductor/bandleader who traverses the worlds of classical, jazz and pop. “He knows every choral work written by any composer at any time. Period.”

Brunelle’s knowledge extends beyond choral music. For instance, when he went on a tour of the Musical Instrument Museum in Phoenix before it opened in 2010, he corrected a few historical dates on signage that were off by maybe a year or two.

On the other hand, he may not know Ariana Grande from Lady Gaga — but he finds out. That’s why VocalEssence has collaborated with local artists such as hip-hop star Dessa and why, for a Super Bowl medley of Minnesota tunes, the singers covered everyone from Semisonic to Judy Garland and “The Mary Tyler Moore Show” theme song.

Fittingly, Brunelle’s motto for VocalEssence is “expect the unexpected” because “choral music is not one thing.” So in April, Vocal­Essence will do a choral program of Bob Dylan material in a rock venue, St. Paul’s Palace Theatre. For Benjamin Britten’s operetta “Paul Bunyan,” Brunelle has used a warbling cowboy, opera tenors wearing Up North headwear and a telegram singer arriving on a bicycle. When VocalEssence sang at the opening of a Mervyn’s department store in Southdale in the ’90s, the singers harmonized on “Merv, Merv, Merv, Merv is the word” to the refrain of the Trashmen’s 1963 pop hit “Surfin’ Bird.”

“Philip has an eye for the absurd,” said Brian Ruhl, one of VocalEssence’s longest tenured singers at 25 years. “He loves to bring in limericks his son writes. He has a dry, wry sense of humor. He never takes himself too seriously.”

Brunelle will indeed laugh at himself. Like the time, in a sleep-deprived haze while working on a Minnesota Opera production in the 1970s, he was playing a lunchtime gig at a library with vocalist Vern Sutton.

“Vern said he was singing and he heard sounds from the piano that he didn’t expect and he looked over and I had fallen asleep, but I kept playing,” Brunelle remembered with a chuckle.

When it comes to rehearsals with VocalEssence, however, Brunelle is a model of no-nonsense efficiency.

He kicked off a session on election night by asking anyone tempted to check a cellphone for results to please put the phone in a cardboard box in the front of the Plymouth Congregational Church chapel. Then he proceeded with a little background on composer Muhly, whose new piece they were about to practice. “This week’s New Yorker has a big article on him,” the maestro crowed, then quoted the story.

Later, Brunelle was momentarily puzzled when a singer asked about the pronunciation of a Middle English word in the text. Uncertain, the director said he’d have to call Muhly in the morning.

“He’s strict but amiable,” bass singer Ruhl said of the choirmaster. “He’s not a disciplinarian type. He’s all focused. There’s no chitchat.”

After the 2½-hour rehearsal, the indefatigable Brunelle scurried determinedly to his piles-filled office at Plymouth, talking as he went. “If I don’t keep my energy up, how can they?” he said of his singers, most of whom are young enough to be his children.

He then spent an hour making notes about the rehearsal so he and the singers could prepare for their next session. And he could call Muhly in the morning — as well as some potential donors.

On that list of future calls is the Legislature. That body, not the governor, would have to green-light the across-the-aisle singalong.

“I’m still hoping we can find some occasion that they can sing together,” Brunelle said, unfazed. “Maybe there is a session around some historic Minnesota day where they gather together and can sing. So I’m not putting the idea aside. We just have to find the right time.”

• Hired as percussionist by the Minneapolis Symphony Orchestra (now Minnesota Orchestra) at age 19.

• Named choirmaster and organist at Plymouth Congregational Church in 1969.

• Named house pianist for inaugural season of radio’s “A Prairie Home Companion” in 1974.

• Receives honorary Order of the British Empire in 2005.

• Leads VocalEssence in backing the Rolling Stones in 2015.