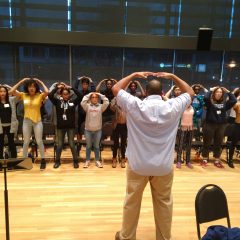 Creating community has been VocalEssence’s mission since the nonprofit choral organization formed in 1969. That commitment strengthened in 1991 with the foundation of VocalEssence WITNESS, a program that celebrates African American heritage and composition through performance and education.

From day one, a huge part of WITNESS has been youth outreach. Along with educational performances for students across the Twin Cities, specific programs give kids the chance to participate in the choral arts. Three years ago, VocalEssence joined with Morehouse College to give 250 high school boys the chance to perform onstage with the college’s Glee Club. Last year, VocalEssence partnered with two schools in North Minneapolis—predominantly African American—and two schools in East St. Paul—majority Hmong and Asian—to form a choir and foster inter-community dialogue that otherwise might not have existed.

It was around that time that the light bulb went off for G. Phillip Shoultz. Too often, he realized, local youth choirs don’t represent the diversity of the Twin Cities. Students don’t have the opportunity to interact with peers from different backgrounds, especially when it comes to singing. “We have a lot of African American kids who sing in their church programs, we have a lot of Karenni kids who sing Karenni traditional songs, Hmong kids who have their own culture and heritage of music, and of course the Scandinavian origin choir tradition here,” Shoultz explains. “But it’s like, never shall those groups sing together. So we wanted to create a space where we can bring kids from a variety of backgrounds together to sing songs that reflect all of our heritages.”

The VocalEssence Youth Choral Arts Initiative was the logical solution: A choir that represents the diversity of the Twin Cities, and provides kids with the chance to pursue artistic interests outside of the classroom. More importantly, it is a choir that focuses on forming a community of art lovers for the future. Shoultz strongly believes that bringing diverse art students together will mold compassionate leaders of tomorrow. “It’s a chance to create the art lovers, the patrons, the civic leaders, who will continue to keep art at the forefront of our communities. Research is telling us what arts do for communities, as far as promoting healthiness and wellness and mood…that’s what we’re trying to promote.”

So far, it seems to be working. “[The students] are passionate about the songs that have a message, that are bigger than just being pretty or sounding good,” Shoultz says. “They want the art that they make to have a purpose, that’s working towards making the world a better place.”

Representation and diversity were primary goals in the creation of the Youth Choir, and it shows. The choir has 56 students from 14 schools in Minneapolis, St. Paul, and St. Louis Park. Shoultz says that around 70 percent of the participants are students of color, and the group encompasses a wide range of socio-economic status. But the students weren’t cherry picked to fit VocalEssence’s vision. During the recruitment process, Shoultz visited public schools all over the Twin Cities, enticing students with free gifts—“I never go anywhere without swag,” he says—in an effort to pique interest. Curious (or swag-loving) students signed up to learn more about the program before submitting a video audition. Those accepted into the choir then received more information about the scope of the commitment, and could decide whether they wished to join.

The commitment isn’t small. Every Monday, VocalEssence transports kids from their schools to Augsburg University. After a brief study hall, the kids rehearse for an hour and a half, and then eat dinner at the Augsburg Dining Hall. Another hour of rehearsal follows before VocalEssence brings the students home. All in all, it’s a four-and-a-half-hour commitment, every Monday, for 40 weeks. No joke for a bunch of high schoolers.

The first rehearsal took place on the last Monday in October—Shoultz was still recruiting in December. And, of course, there were challenges. “I’ll never forget the first day,” Shoultz laughs. “We were at the Target Atrium at Orchestra Hall, and as each group of students came in [from different schools], they’d sit at separate tables.” But even in that first rehearsal, music brought the students together. After some ice-breaking activities, the students got to chatting, laughing, and singing together almost immediately. The choir’s connection has only grown stronger, Shoultz says. “Just today, one of our young people…she said without prompting: ‘You know, this is a family, it’s become a family environment that we look forward to each Monday.’ And the other kids nodded.” For Shoultz and VocalEssence, that was the goal from the start.

Well, that, and having a top-notch choir. From the get-go, Shoultz asked his students to push themselves. “I’ve asked them to sing classical production, where we’re teaching them how to sing like they were singing Mozart or Beethoven, and then I have them in front of a hip-hop, spoken word rap artist, where we’re learning that style, and gospel, and jazz.” They responded with gusto. Some students have had 12 weeks of rehearsal; others only four. But every student has been willing to put in the hours, whether singing in styles they’re uncomfortable with, or helping set up and breakdown the rehearsal space.

All that hard work culminates with the Youth Choir’s debut performance this Sunday, February 18, when the VocalEssence Chorus presents VocalEssence WITNESS: Of Such I Dream. The Black History Month concert revolves around the Harlem Renaissance and features the world premiere of William Banfield’s I Trust Harlem Is Still There, a chamber symphony based on Langston Hughes’ letters. While only the adult chorus will perform that piece, the Youth Choir will sing songs based on and inspired by Langston Hughes’ writing, with the persistent theme of dreams (pieces include “I Dream a World” and “Hold Fast To Your Dreams”). Shoultz believes that the Harlem Renaissance—one of the most fertile creative periods in African American history, and one that’s noticeably absent in the American education curriculum—is a powerful and relevant guide on how to bring about changes in our community. “The Harlem Renaissance artists, and Langston Hughes in particular, were not afraid to articulate their dreams as a way to raise them up from what they were experiencing in the moment,” he says.

It’s easy to see how that message pairs with the Youth Choir—we all want our kids to dream of a better future. That being said, Shoultz wants the concert to affect the audience as much as the performers. “Our challenge to the community is: can we be dreamers, and then be dreamers who are change agents—who go out and make a difference in our communities? I want the people who attend the concert to be challenged and inspired to change their communities.”

It’s a relevant challenge for a Twin Cities community sometimes criticized for confusing “Minnesota Nice” with “Minnesota inaction.” But Shoultz is all positivity. “I’m hoping that the audience will come, and they will sit, and listen, and sing with us in the places that we ask them to sing, [and be] inspired to go out and make small changes in their community. You know, to think about the dreams that they’ve had that they may have let fall, and pick them up again and go “no, this is something I can do, let’s go do it.””

As for G. Phillip Shoultz’s dream? He just can’t wait for the concert. After more than three months of rehearsal, he’s ready to live in the moment and let the music overtake him. He encourages everyone in the Twin Cities to do the same. “Super Bowl’s over now,” Shoultz says. “Let’s come out, and let’s regroup, and get ready for the spring.” With a group as inspiring as the VocalEssence Youth Choir, it’s easy to see sunnier days ahead.