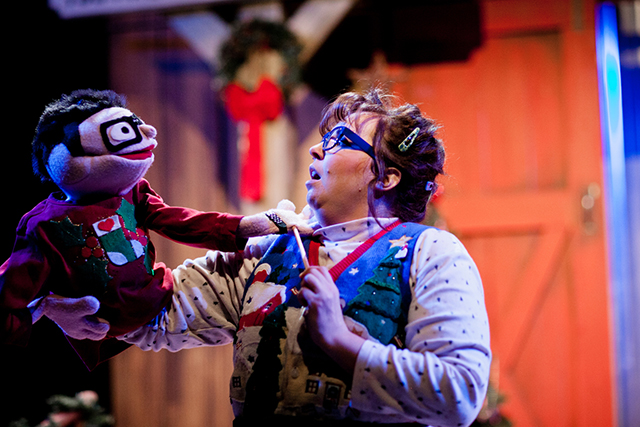 Photo by Guy Magno
A scene from a previous production of “Another Miracle on Christmas Lake.”

Take a break from downtown parking woes … in both cities. Good theater happens in places that have ample free parking just outside the door. Three robust theater companies have recently announced their 2019-20 seasons.

Yellow Tree Theatre in Osseo will produce four shows from September through May. It will launch its 12th season with “Curious Incident of the Dog in the Night-Time”(Sept. 13-Oct. 13), Simon Stevens’ five-time Tony winner based on the novel by Mark Haddon. Ellen Fenster will direct. How will a small community theater approach what most people know as a big, high-tech Broadway production? It will be worth finding out. Next up: “Another Miracle on Christmas Lake” by Yellow Tree co-founder Jessica Lind Peterson (Nov. 8-Dec. 29). With this and Lind Peterson’s “Miracle on Christmas Lake,” Yellow Tree has a pair of reliable holiday hits.

Dominique Morrisseau’s “Skeleton Crew” will follow (Jan. 31, 2020-March 1). A co-production with New Dawn Theater, directed by Austene Van and set in Detroit at the start of the Great Recession, this play is part of Morrisseau’s Detroit Project cycle. The season will end with the Minnesota premiere of “Sherwood/The Adventures of Robin Hood” (April 10-May 10), a comedy written by Ken Ludwig and directed by Craig Johnson. Season tickets are on sale now.

Lyric Arts in Anoka, a full-time, year-round theater, will produce nine plays in its 24th season. It will open with “Bright Star” by Steve Martin and Edie Brickell (Sept. 6-29), a musical set in the Blue Ridge Mountains with a Grammy-nominated score. David Auburn’s Pulitzer Prize-winning “Proof” will follow (Oct. 18-Nov. 3), after which “A 1940s Radio Christmas Carol” (Nov. 22-Dec. 22) will ring in the holidays with drama, laughs, and swing arrangements of Christmas standards. In the New Year, prolific playwright Steven Dietz’s “Bloomsday,” about a love affair that might have been, will have its area premiere.

The new year will bring work by best-selling author Kate DiCamillo to at least two area stages. In March 2020, the Minnesota Opera will premiere “Edward Tulane,” a new opera based on her book “The Miraculous Journey of Edward Tulane.” A month earlier, Lyric Arts will present John Glore’s play “Flora & Ulysses” (Feb. 14-23), based on her 2014 Newbery Medal winner.

Next at Lyric Arts: Rupert Holmes’ “The Mystery of Edwin Drood” (March 13-April 5), a five-time Tony-winning musical whodunit. In Sharr White’s “The Other Place”(April 24-May 10), another mystery will unfold, this one blurring fact and fiction, past and present.  The end of May will bring Larry Shue’s farce “The Foreigner” (May 29-June 21), an audience favorite. And the theater that never takes a break will end its season with the Pulitzer- and Tony-winning musical “How to Succeed in Business Without Really Trying” (July 10-Aug. 8). Season subscriptions go on sale April 29, single tickets May 20.

Artistry in Bloomington is both a theater and an art center, housed together in the Bloomington Center for the Arts on Old Shakopee Road. The theater’s two stages are overseen by Benjamin McGovern, who became producing artistic director in 2015 after years at the Guthrie and Jeune Lune. McGovern will direct all five productions in Artistry’s 2019-20 season, starting with the popular musical “Footloose” (July 19-Aug. 18). Then Thornton Wilder’s Pulitzer Prize-winning evergreen “Our Town” (Sept. 6-29), still profound and beautiful after all these years. October will bring “A New Brain” (Oct. 18-Nov. 9), a semi-autobiographical musical by Tony Award-winning William Finn.

Based on the smash hit romantic novel by Robert James Waller, the musical “The Bridges of Madison County” (Jan. 24, 2020-Feb. 19) will have its regional premiere at Artistry with Jennifer Baldwin Peden as Francesca Johnson and Eric Morris as Robert Kincaid. A strong season will close with Mame! (April 17-May 10). Current subscribers may renew now. New subscriptions and single tickets go on sale May 13.

Tonight (Wednesday, April 24) at the Riverview Theater: 6th Annual LunaFest. This year’s edition of the traveling film fest includes eight award-winning shorts by, for, and about women. Minnesota Peacebuilding Leadership Institute is the host, Minneapolis City Council VP Andrea Jenkins is the honorary chair, and the films are suitable for ages 13 and up. 6-9 p.m. FMI and tickets ($25-50). Proceeds support community peacebuilding.

Thursday at the Minnesota Museum of American Art: Artist Talk: “The Good Making of Good Things.” The M’s current exhibition celebrates American craft, past (with a focus on midcentury) and present. Three local artists whose work is featured in the show will discuss their processes and practices with Kristin Makholm, the museum’s executive director. With Paul Briggs, Allison Rose Draver and Tetsuya Yamada. 6-7 p.m. Free, but registration is required.

Thursday and Saturday: Le Patin Libre: “Vertical Influences” with special guests Brownbody: “Tracing Sacred Steps” (excerpt). There’s the ice dance we see in the Olympics, figure skating championships and ice shows, usually based on ballroom dance. And there’s this: performance art on skates, infused with theater, hip-hop, and modern movement. The Walker/Northrop collaboration features the Montreal-based group Le Patin Libre – former championship skaters, minus the spangles – in a thrilling one-hour performance. Both days include an excerpt from a new work by Brownbody, a local company led by Deneane Richards whose black skaters are breaking all kinds of barriers. Thursday at the Breck School/Anderson Ice Arena in Golden Valley, Saturday at the Charles M. Schulz Highland Arena in St. Paul. Le Patin Libre times and tickets here($28/24). Brownbody times here; performances are free, but a ticket is required. Pick up tickets on-site one hour before the program. And be sure to dress warmly.

Saturday at the Palace Theatre: VocalEssence: “The Times They Are A-Changin’: The Words and Music of Bob Dylan.” The VocalEssence website lets you know that “Bob Dylan will not be performing at this concert.” But maybe the Stones will? Kidding. This will be more than enough: the VocalEssence Chorus and Ensemble Singers, singer-songwriter Ashley DuBose, singer-songwriter Jeremy Messersmith and Nation (founded by Jocelyn Hagen and Timothy C. Takach), an eight-piece chamber orchestra. Together they’ll perform the words and music of Bob Dylan – and other Minnesotans including Stephen Paulus and Prince. Dylan’s songs have been arranged for chorus by Stephen Hackman. We hope someone will record this. Legally, of course. 6:30 p.m. doors, 8 p.m. show. FMI and tickets($30-40).