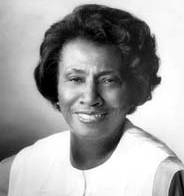 American composer Undine Smith Moore composed in a variety of different forms and genres, but is best known for her arrangements of spirituals and other choral compositions and for her work as an educator. Moore was born in Jarratt, Virginia, and studied at Fisk University and Columbia University. From 1927 until her retirement in 1972, Moore was a beloved professor of music theory, piano, and organ at Virginia State College, where she also co-founded and co-directed the Black Music Center. Additionally, Moore served as a visiting professor for several colleges and universities. Her numerous awards include the National Association of Negro Musicians Award and honorary doctorates from Virginia State University and Indiana University. Moore’s original choral compositions are appropriate for use in liturgy and strongly connected with her religious faith. She was also a lover of spirituals, and began arranging them by transcribing melodies that she learned from her parents which her parents learned in childhood. In these arrangements, Moore excels at preserving the emotional intent that these songs originally held through rhythmic vitality and traditional melodies and harmonies.