When did you first learn about John Rutter (and his music)? 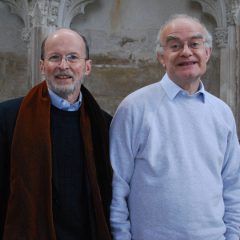 Philip Brunelle and John Rutter during the VocalEssence tour to England in 2009. Photo Credit: Jennifer Bauer

I have always been curious about discovering composers new to me from all over the world. It was early in the 1970s that I found John’s cantata “The Falcon” which was premiered in 1969 when he was in his early 20s.

What made you perk up and pay attention?

I immediately sensed that this composer had a real understanding of vocal writing, and the ability to create memorable melodies.

What are two favorite memories that you have of John?

1. Being with him and his wife Joanna in their home outside Cambridge and seeing how he ‘works’ – a private cottage for composing and editing his Cambridge Singers recordings. 2. When the Ensemble Singers performed in England (2009), John volunteered to bring his recording equipment and record our concert in the Lady Chapel at Ely Cathedral. When he walked in with all the equipment and the Ensemble Singers realized who it was they were astonished: “Is that REALLY John Rutter who has
come to record our concert?”

Is there an element of your personality (musical or otherwise) that you and John share?

Both of us are curious about the wide world of music and share a love for music of the Renaissance and Baroque and the mastery of choral composers of those era.
Why is it important to share John’s music today? John is the ‘ne plus ultra’ of choral composers with his amazing gift for finding just the right tone to set a text. Singing is about many things, melody being a prominent one, and John has an unending supply of melodies to share – and for singers and listeners to remember!

What is one of your favorite pieces written by John and why?

Among all the charming settings of Christmas carols, I am very fond of his “Past Three A Clock” — an old English carol. Since the text begins by speaking of 3AM when it is quiet outside, John begins with a solo voice, unaccompanied, and gradually other voices and instruments are added, each of the 7 verses having a different color, coming to a grand fortissimo conclusion!

What are you most looking forward to at the Rutter Returns concert?

Having John Rutter with us putting his unique stamp on his music – we are so fortunate to have this outstanding man not only conduct us, but also be the person responsible for the music itself!