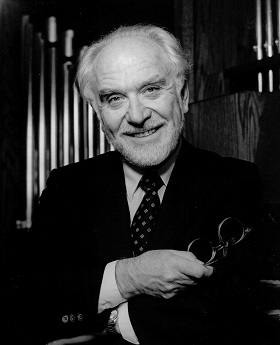 Composer and organist Paul Manz is known for his widely-admired motet “E’en So, Lord Jesus, Quickly Come” and for the hymn festivals he organized and led. Manz attended Concordia River Forest (now Concordia University Chicago) before obtaining his master’s degree in music at Northwestern University. He later served as cantor for Mount Olive Lutheran Church in Minneapolis, Minnesota beginning in 1950. In addition to his work at Mount Olive, Manz traveled throughout the United States as a leader of organ clinics, recitalist, lecturer, and leader of his acclaimed hymn festivals. At these festivals, Manz led the singing of collections of hymns centered around common themes with his own arrangements and skilled improvisations. His passion for sacred music is evident in his compositions and arrangements for choirs, handbells, organ, and instrumental ensembles. Manz excelled at evoking the meaning and mood of the text in his choral music to create a moving experience for singers, audiences, and congregations around the world.