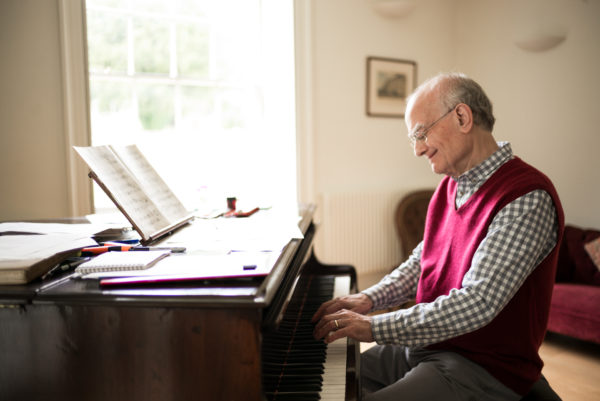 Prolific composer John Rutter captures audiences around the world with his choral compositions and arrangements. Rutter attended Highgate School in London and went on to study at Clare College, Cambridge. Rutter served as Director of Music at his alma mater Clare College until he left teaching to devote more time to composition. As a composer, Rutter is best known for his choral works. He composes choral pieces in a variety of forms, including concert-length sacred works, short anthems, arrangements and original compositions of Christmas music, and secular music rooted in the English part song tradition. Rutter’s music is often gentle, lilting, and melodious, as demonstrated in the well-known pieces For the Beauty of the Earth and Candlelight Carol. Other Rutter pieces, like his Gloria, are full of powerful rhythmic vitality. In addition to his work as a composer, Rutter has served as an editor for the Oxford Choral Classics series, the co-editor of the Carols for Choirs series, the conductor and founder of The Cambridge Singers, and a frequent guest conductor of choirs around the world.

For more on John Rutter, visit his website: https://johnrutter.com/