Creative Minnesota highlights the positive impact being made by artists and creative workers. The 2017 study found that every region of the state has a robust arts economy, from the prairies of southwest Minnesota to the busy Twin Cities area to the tourist magnet that is the North Shore. The combined annual economic impact of nonprofit arts organizations, their audiences, and artists and creative workers statewide is over $2 billion, making Minnesota’s arts economy double the size of Wisconsin’s even though we have roughly the same population. (It is ten and a half times that of Kansas, and twelve and a half times that of South Dakota.) 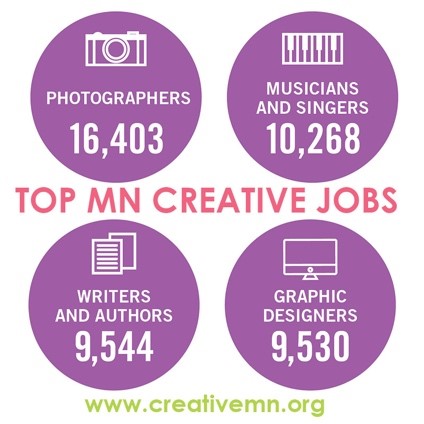 These creative occupations included many specific to music, including music directors and composers, musicians and singers, audio equipment technicians, sound engineering technicians, and others.

The study did not differentiate between for-profit or not-for-profit workplaces.

There are 10,268 musicians and singers in Minnesota, the second largest creative worker profession in the state.

Many, Many Nonprofit Music Organizations

Minnesota has a huge music sector in part because, in addition to a booming for-profit music scene, there are so many nonprofit music organizations in Minnesota, including:

Interest in Music is Growing Among Younger People

Part of this year’s Creative Minnesota report was a statewide survey of Minnesota’s artists and creative workers. The different generations report practicing different art forms, with 46 percent of those born before 1946 most commonly doing the visual arts and Millennials most often (25 percent) practicing theater.

The popularity of music as an art form has been slowly growing with each successive generation. Seventeen percent of Millennials put themselves in the music/opera/ musical theater category, compared to only 9 percent of Elders. 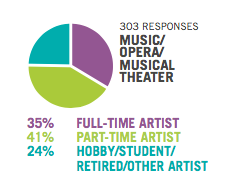 ingly, people in the music/opera/ musical theater category were most likely to report that they worked full-time as artists (35 percent) compared to most other artistic disciplines. However, the remaining 41 percent of people in this category reported being part-time, and 24 percent said they were hobbyists, students, or retired.

In contrast, only 23 percent of visual artists were full-time, and only 22 percent of photographers were working full-time in their field.

Musicians were the Highest Paid Creative Workers Among Survey Respondents

Download the full report to see how musician or singers compare to other artists at www.creativeMN.org.