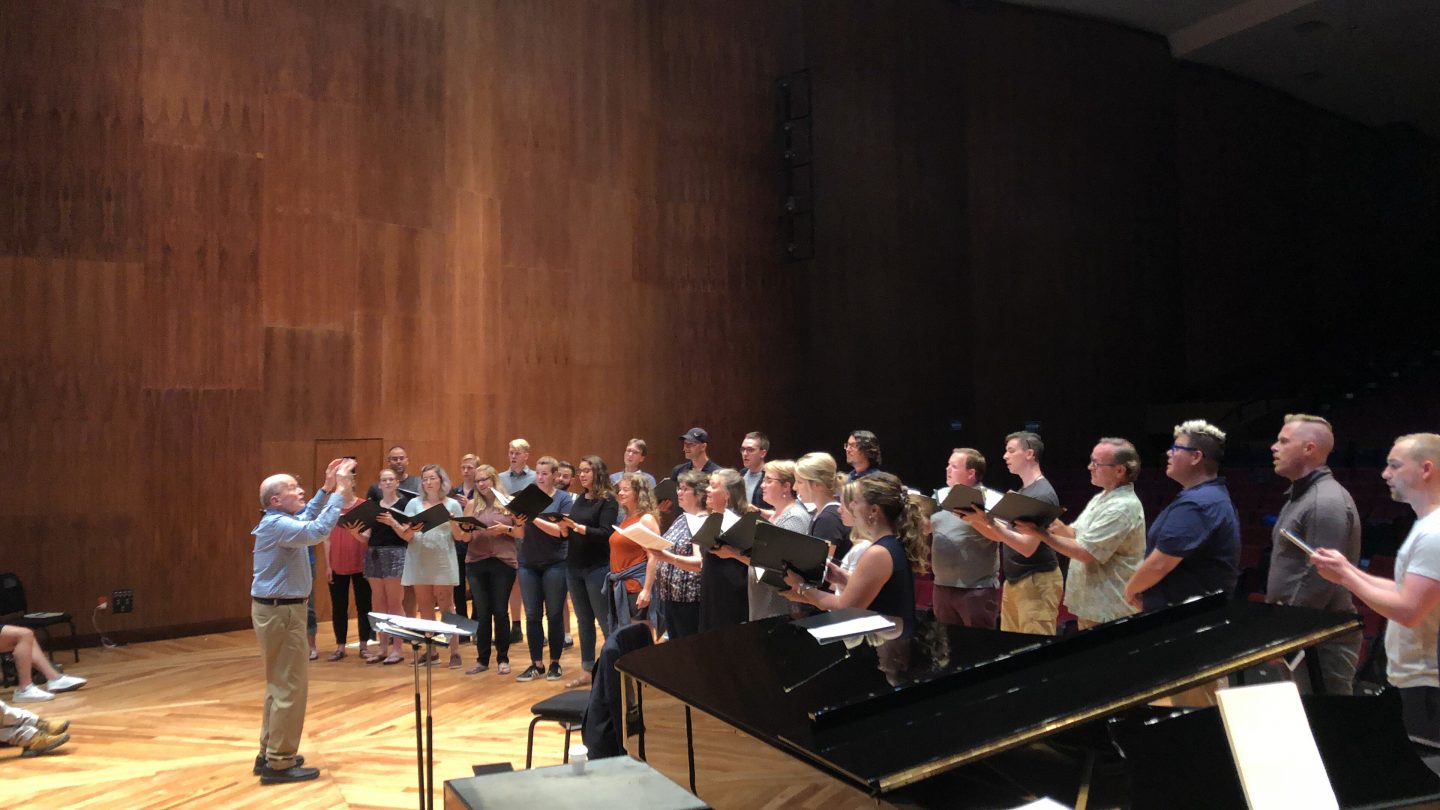 We each went our own ways this morning and early afternoon. Some visited Frieda Kahlo’s house Casa Azul, some the Museo Nacional de Antropología, and some Castillo de Chapultepec. There is no end to the beauty and wonders of Mexico City.

At 3:30 we put on our concert clothes and piled into the vans for a long trip to the Academia Musica del Palacia de Mineria. Although we traveled fewer than five miles, the traffic made most parking lots look like lightspeed travel. Vendors wandered in the road among the stopped cars, selling flowers or candy.

Tonight was our solo concert, and so when we at last arrived at the Academia, we ran through our pieces in Sala Xochipillo, an auditorium that seats maybe 500 people. It’s always tricky getting used to each new space, its quirky acoustics. The wood-paneling in Sala Xochipillo made the hall live, and the basses’ voices especially resonated, while the altos struggled to hear one another. Each time, we adjust, enunciate more, rebalance.

A few people sat to watch the rehearsal, including a student who was especially enraptured during Jocelyn Hagen’s “Hands.” He immediately asked Ethan what time the concert started and then texted his friends: you’ve got to hear this.

Hagen’s piece was a highlight of the evening, no doubt. As it started, we all saw the student nudging his friends, as if to say: this is it! When we ended and the sound trailed off into silence, someone in the audience breathed out: “WOW!”

We had begun the concert with several American composers, (some Minnesotan): Copland, Paulus, Argento. But after Hagen’s piece, the Mexican audience was really with us. It’s funny how you know when you have an audience; the space between you and them gets more taut, they lean in. Their faces light.

Then Philip, speaking to the audience through Samuel who translated for him, introduced the next pieces by explaining VocalEssence ¡Cantaré!. The United States needs to know more Mexican composers, he said; so each year, he selects Mexican composers to come to Minnesota to work with and write songs for children in various public schools in the Twin Cities. Philip motioned for all the ¡Cantaré! composers in the audience to stand, and the audience went wild. “Music is the way to celebrate the friendship between our two countries,” Philip said. The audience went wild again.

We sang Rodrigo Cadet’s “Navidad Mexicana” and Jorge Cozatl’s “Pasar le vida.” Diana Syrse’s “Popurri a la Mexicana” is a medley of popular folktunes, and we all talked afterward how we saw people singing along, mouthing the Spanish back to us, beaming.

Introducing our set of Bob Dylan songs, Philip explained to the audience how he’d selected the songs we’d sing: “I called the Mexican Embassy, and asked them: Which Bob Dylan songs do Mexicans know?”—At which point, a man in the audience called out “All of them!”

It was true. We all saw the audience mouthing the words to “Like A Rolling Stone,” and “Blowin’ in the Wind.” Even as the first notes sounded in “Knocking on Heaven’s Door,” people touched one another on the shoulder, and swayed.

“We are so honored and privileged to be asked to sing for you, and we love being here in Mexico City,” Philip said. He turned around to see all of us nodding our heads madly, and he laughed. The audience cheered, and stood. We took three bows, and the audience began rhythmic clapping, so we performed our encore, “La Cucaracha.” Again, they stamped their feet, cheered. One man threw handful after handful of white and yellow chrysanthemums onto the stage. The altos and sopranos stooped to gather them, to place them in our hair.

As the vans pulled away, we saw the student and his friends waving from the sidewalk and calling out to us: goodbye, goodbye!

They put their hands together and lifted them up in the shape of hearts.

In case you missed it, check out Postcards from Mexico-Day 2 HERE.