The VocalEssence Ensemble Singers have been invited to join the legendary Orquesta Sinfónica de Minería (OSM) in Mexico City from August 26 through September 2 for a cross-cultural celebration to mark the orchestra’s 40th anniversary and the 50th season of VocalEssence. VocalEssence will be performing with the Coro de la Orquesta Sinfónica de Minería and soloists Katherine Whyte, Grace Echauri, Thomas Studebaker, and Kevin Deas.

During the summer in Mexico, established regional symphony and opera orchestras do not perform, so OSM is comprised of the top players from these orchestras for a two-month summer program of concerts. A true all-star team, the OSM is known as one of the best orchestras in Mexico. According to its mission, the orchestra exists to “promote Mexican music, musicians and composers, find talent, invite other orchestras and ensembles, and include the rescue of lost music and forgotten musicians of our country.” The OSM is conducted by Carlos Miguel Prieto, Mexico’s most well-known conductor, and music director of both the Mexican National Symphony and the Louisiana Philharmonic in New Orleans, as well as a noted commissioner of new works.

This summer, in honor of its 40th season, the OSM will perform all nine Beethoven symphonies—including the Ninth Symphony and its iconic final choral movement. VocalEssence, in honor of its 50th season, has been invited to perform the Ode to Joy—a musical proclamation of universal brotherhood and possibly the best-known vocal composition in history—along with a Brahms motet, which will be conducted by Philip Brunelle. 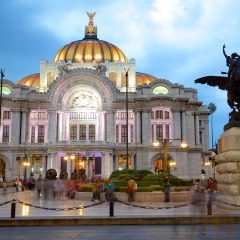 “For the Brahms, the Ensemble Singers will be joined by an equal number of professional Mexican singers,” says Philip Brunelle, artistic director and founder of VocalEssence. “It’s a wonderful way our organization can fulfill its mission of bringing cultures together. We’re especially excited that both concerts will take place in Mexico City’s Sala Nezahualcoyotl—considered by many to be the best concert hall in Latin America. There will also be a third performance in Mexico City’s famous auditorium in Bellas Artes.”

Philip is himself a recipient of the Mexican government’s prestigious Ohtli Recognition Award—which highlights those who have aided, empowered, or positively affected the lives of Mexican nationals in the United States and other countries—for his work with the VocalEssence ¡Cantare! Program, a program that for a decade has brought the talents of Mexican composers directly into Minnesota classrooms, and culminates with a bilingual concert each spring.

In addition to the OSM performances, the VocalEssence Ensemble Singers will present a solo concert of music by United States and VocalEssence ¡Cantaré! composers in the Auditorio Blas Galindo of the Centro Nacional de las Artes on August 28, 2018 in the evening. There will also be an opportunity for the group to meet with several university choruses—both singing together and performing for each other.