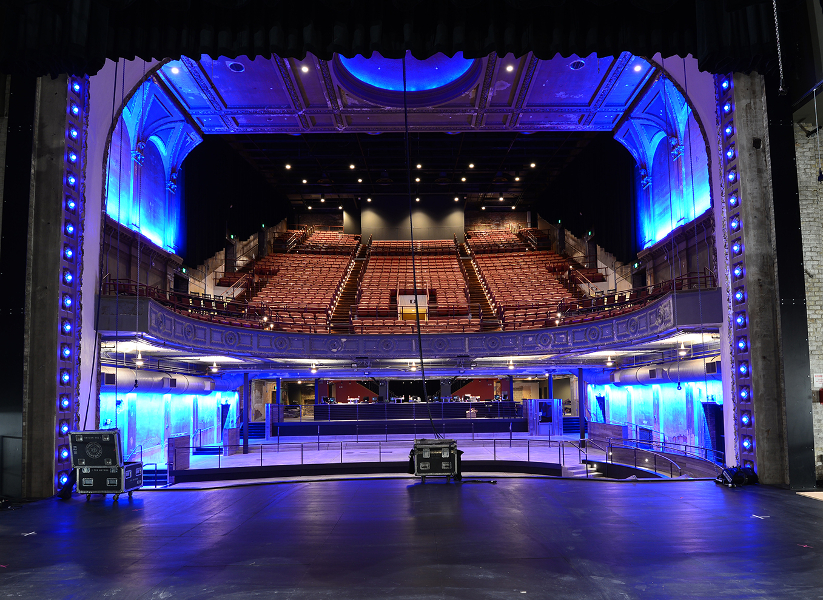 Artistic Director Philip Brunelle was interviewed about why VocalEssence chose to perform The Times They Are A-Changin’ at the Palace Theatre in Saint Paul.

The Palace Theatre is not the first venue you think of when you think of a choir concert. Why did you choose to perform at the Palace?

I always think about the music first. Would it make sense to listen to Bob Dylan’s music in the Cathedral of Saint Paul? No, would come to mind. Dylan’s music needs to be heard in a place where someone could stroll over to the bar in the middle of a song and grab a drink. I also love the idea of choir singers in a rock venue—I’m all about creating an experience where audiences ‘expect the unexpected.’

Who else has performed at the Palace Theatre?

Many, many musicians. Some local “non-traditional” artists include the Saint Paul Chamber Orchestra and Tu Dance.

History of the building

The Palace Theatre has been around for more than 100 years! It was built as a vaudeville theatre in 1916, and has hosted performers such as Charlie Chaplin, the Marx Brothers, and George Burns. This is just the tip of the iceberg on the history of this venue. Read more about it on their website: http://palacestpaul.com/history/

Why does the building not look restored?

The city of Saint Paul bought it in 2015, and spent $15 Million restoring it—including new bathrooms, an HVAC system, and more. However, they made a conscious choice to keep the aesthetics of the building frozen in time. The crew actually preserved many of the theatre’s original architectural elements, including pre-cast concrete roof panels stamped with the date April 27, 1916.

What should an audience member expect when they come to the concert?

Imagine going to a Bob Dylan concert when you are 25—this experience will be similar. Make sure to bring your ID if you would you like to purchase a drink. Security guards will check inside your bag (if you brought one), and then someone will scan your ticket.

The Times They Are A-Changin’