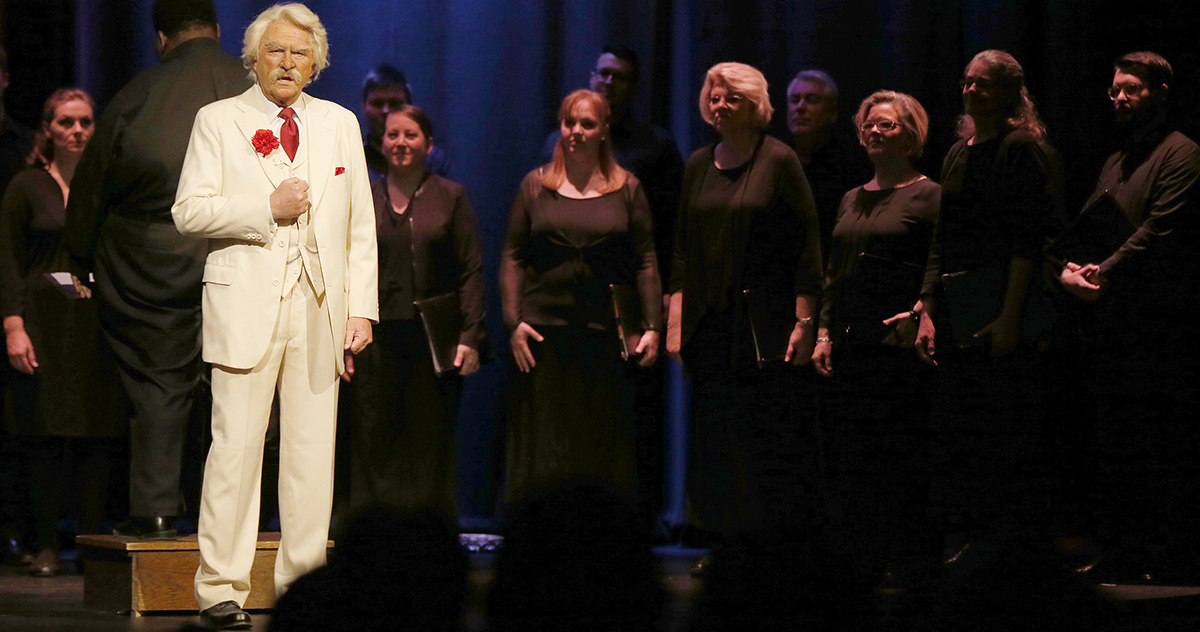 As if you didn’t already have enough great reasons to join us for the Gather at the River with Mark Twain fundraiser for VocalEssence music education programs on May 2, here are five more: The fabulous raffle prizes described below offer the winners another evening of top-tier entertainment—and four seasons of wine!

So make plans to join Don Shelby as Mark Twain, the VocalEssence Ensemble Singers, conductor Tesfa Wondemagegnehu and fiddler Sara Pajunen in a celebration of the Mississippi River aboard the Minnesota Centennial Showboat in St. Paul. There will be cocktails and hors d’oeuvres on the Victorian deck before the concert, and a $10 raffle ticket* nets you the chance to win one of these terrific prizes:

Mill City Summer Opera’s The Daughter of the Regiment and Dinner for Two at Spoon & Stable
Value: $200
Donor: Mill City Summer Opera
On July 11-21, 2015, Mill City Summer Opera (MCSO) will present Gaetano Donizetti’s brilliant comedy The Daughter of the Regiment. The winner will receive two tickets to the Tuesday, July 21, 2015 performance, which is expected to sell out soon after the May 18 on sale date. Prior to the performance, a 6 pm reservation has been made for you at Minnesota’s toughest table reservation—James Beard Award-nominated Spoon & Stable Restaurant—where you can enjoy dinner before the show with a $100 gift certificate

Four Seasons of Wine from Haskell’s

Value: $2,000
Donor: Haskell’s, Jack Farrell, Ann and Brian Farrell
Enjoy an incredible gift basket of wine selected by Ann and Brian Farrell, followed by a case each season for a year, selected by Jack Farrell from Haskell’s. Based on your taste preferences, a Haskell’s representative will select wines to stock your cellar and suit your needs for the next summer, fall, winter and spring seasons.

Two Tickets to Rolling Stones at TCF Bank Stadium on June 3
Value: Ranging from $470 to $890
Donor: Anonymous
After 10 years, Rolling Stones fans are beyond excited that the band will tour to Minneapolis as part of their Zip Code Tour of North America 2015 on June 3, 2015. Enjoy two lower-level or floor seats (exact seats TBD) to the nearly sold-out show at TCF Bank Stadium. “You can’t always get what you want,” but if you win these tickets you might at least get some “Satisfaction.”

There is a matinee and an evening performance of Gather at the River with Mark Twain, and tickets are $100. Buy tickets online or at 612-547-1473

Gather at the River with Mark Twain
Saturday, May 2, 2015 at 3:30 pm and 7 pm
Minnesota Centennial Showboat, St. Paul

Special thanks to our event sponsor, Saint Paul Riverfront Corporation.

* Raffle tickets can be purchased by cash or check only; no credit cards.