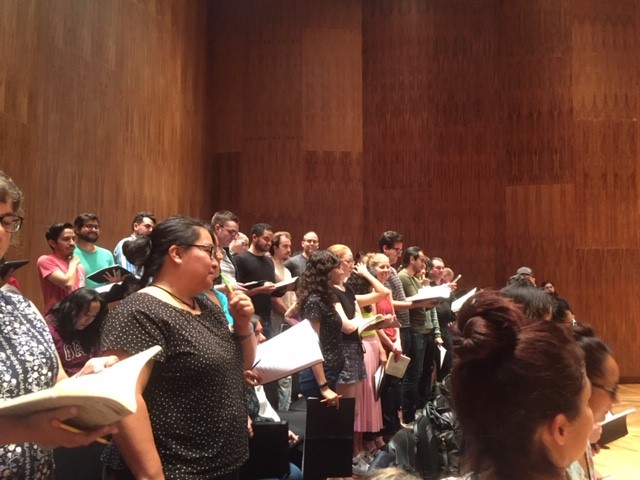 He spoke in both English and Spanish, often switching mid-sentence. “¡Coro! No anxiety, sin ansiedad, about an early ‘s’, por un ‘s’ temprano, on the word ‘agnus.’” His speech was quick, and his gestures animated.  Giving direction to the basses, he said, “You sing like…” He paused, and turning to Samuel, asked, “Come se dice [grunting noise]?”  Later, he admonished the choir, saying, “Don’t sing like this.” And he shimmied and waggled his limbs like an inflatable Gumby at a highway car dealership.

Tonight was our first time with Maestro Prieto and the Orquesta, and we ran through the entirety of Verdi’s Requiem. This morning, though, the Ensemble singers traveled to the Basílica de Santa Maria de Guadalupe, which draws several million pilgrims each year. Pilgrims have come to this place continuously for almost 500 years.

The site was originally a temple to an Aztec mother goddess, pyramids that were razed by the Spaniards. In their place, the original Basílica de Santa Maria de Guadalupe was built in 1709. We sang “Ave Maria” from Rachmaninoff’s Vespers to a small and enthusiastic group who waved as we left.

The original Basílica is a gorgeous building, with stunning iconography and stonework.  But since its inauguration, it has been sinking into the ground. Three meters, now, our guide told us. A new and gorgeous Basilica was built nearby in 1974.

Our guide also told us the story of the virgin’s appearances, and the cloth tilpa that miraculously appeared with her image upon it.

We come from a wide variety of faith backgrounds, believers and nonbelievers of many kinds. I think we all felt a reverence for the faith, standing in a space that was so important to so many people.

In our appreciation of the Basílica, I was reminded of how Philip had said to us last night, “No matter what you believe, you have to find a way to sing the meaning of the text, not just words.”

The Libera Me opens with a passage like Gregorian Chant, the entire 80-piece choir singing just one note, divining the motion of the incantatory text as if we were a intimate group of monks. “Make it an out of body experience,” Maestro said. “As if your spirit is praying.”

I’d be lying if I said long rehearsals are all religious experience all the time. There are long sections where the soloists sing, or the orchestra works through passages; my seatmate looked at pictures of her son on her phone; another alto admired her new ruby-red one-inch nails.  I took notes for this blog.

Before we started the Dies Irae—day of wrath!—Maestro Prieto asked “are you angry?” An alto shouted back, “Did you say hungry?”

And then the Dies Irae. The heavens split open—the timpani, the bass drum, the fierce chromatic descent of the lower voices—and hair rose on my forearms, cold lightning streaked through my neck bones. The wooden risers shook under our feet. For a split second, the alto beside me looked honestly terrified.

The Agnus Dei has a notably extended unison section. “Lamb of god, you take away the sins of the world. Grant us peace.” Of course, this is in Latin, and the singers’ native tongues are Spanish and English. There’s something moving about the common language of Latin which none of us speaks, especially as we all sing for mercy in utter unison, as one voice.  We are joined, also in unison, by the bassoons, and both the first and second violins.  And for much of the whole movement, the soprano and mezzo soloists sing in octaves, but at the end, for the first and only time in the entire Requiem, the two women sing in unison the exact same notes. We are a world of various kinds of voice, Verdi seems to say, but in this beseeching need, we are one. Artifice is stripped away. There is little orchestral accompaniment and no frippery.  This is us in our most essential and bare humanness. In this moment of the Requiem, the world is exposed and begging for peace.

Nick Mattson, one of the tenors in the Ensemble Singers arrived early to rehearsal tonight and recognized another tenor, Mexican, whom he’d met and liked last year.  The two walked to a nearby coffee shop and talked until rehearsal started. “All the craziness, all the music, the tour, and it was so nice just to sit down face to face.” They spoke in both Spanish and English, joking about the percentages to which they’d each mastered the other’s native tongue. They talked about U.S. politics, about the rigor of VocalEssence auditions, about the Mexican tenor’s plans to visit Minnesota. “Coffee is an international ritual,” Nick explained.  “It says: I want to talk but also to listen to you.” When I asked him why coffee, he laughed.  “The coffee is secondary; the friendship is primary. That’s why we came to Mexico.”

It’s a crazy idea, congregating 180+ people on a stage, each with slightly different parts and instruments, to make something grand. The idea is also very ancient; Verdi’s piece is 200 years old and we’ve been making music together a lot longer than that, many times over. Edifices fall into the soil, and temples get raised. But what pilgrims create by the mere fact of coming together is itself a more permanent wonder. This belief that if we congregate and raise our voices together, it will make something bigger and grander than our individual selves—it lasts.

In case you missed it, check out Postcards from Mexico-Day 3 HERE.