October is off to a rousing start for Associate Conductor G. Phillip Shoultz, III. He’s launched the second season of the VocalEssence Singers Of This Age, as they prepare for their Identity concert on November 8, 2018. He spent two days training VocalEssence ¡Cantaré! composer, Pablo Mendoza, for workshops in our partner schools. This past weekend he completed two successful performances of Dan Forrest’s Requiem for the Living with joint church choirs, sang for a wedding, and preached a sermon on Passionate worship at Good Samaritan UMC in Edina. Now, he sets his sights on leading hundreds of singers in the National Anthem at the final MN United soccer match before a crowd of 50,000 at TCF Bank stadium! 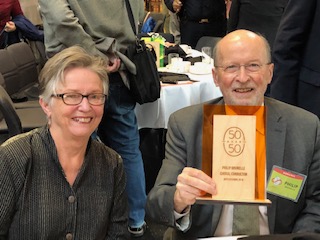 For Artistic Director Philip Brunelle, the 50th Anniversary Concert was a highlight this fall. He comments, “It was a thrill to walk on the stage and be greeted by a full hall and receive such a warm ovation. Because I wanted to have VocalEssence nationally, I was pleased that Senator Tina Smith and the head of the music program at the National Endowment for the Arts, Ann Meier Baker, could be with us.”

For Philip, the following weeks have been equally thrilling. He received the 50 of 50 award from Pollen, and enjoyed the final Gala event – the dinner and fabulous comments with Lynne Rossetto Kasper. He also will be celebrating the 91st birthday of Dominick Argento with a performance with Maria Jette.