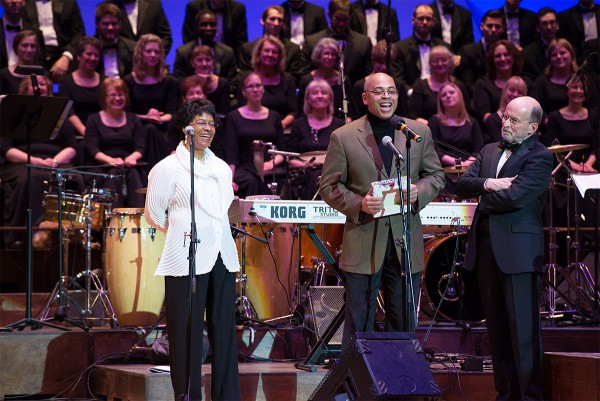 Congratulations to pianist, composer, arranger and producer Sanford Moore, who received the Reatha Clark King Award on Sunday, February 8 at the VocalEssence WITNESS: Let Freedom Ring concert at Orchestra Hall and was presented with a one-of-a-kind work of art created by past WITNESS Teaching Artist Ta-Coumba Aiken.

The Reatha Clark King Award for Excellence and Youth Motivation through the Cultural Arts was developed by VocalEssence in 2007 to celebrate and recognize leaders and organizations that provide the resources to empower youth through direct contact, making a way for them to be as successful as they can be.

The ninth recipient of the annual award, Sanford is perhaps most noted as founder, director and arranger of the award-winning vocal jazz ensemble Moore by Four and has been an important part of VocalEssence WITNESS programs in seven concerts:

Sanford  has traveled extensively with his ensemble doing concerts and workshops in the United States, Europe and Japan, including appearances at the Super Bowl and World Series, and has shared the stage with such notables as Harry Connick, Jr., Joe Williams, Sarah Vaughn and Dizzy Gillespie.

He is musical director for Penumbra Theater, with other musical directing credits including the Guthrie, Mixed Blood and Illusion theaters. He has been commissioned as an arranger and composer by National Public Radio RadioWorks, VocalEssence, the Dale Warland Singers, the Disney World Jazz Ensemble and others. He has also composed and produced jingles for companies including Target and Federal Express.

Sanford’s choral experience includes his long-time association with VocalEssence, a 10-year appointment as adjunct professor at the University of Minnesota School of Music conducting the Gospel Choir, and his position as minister of music for Fellowship Missionary Baptist Church in Minneapolis.

Thank you, Sanford, for all that you have done for WITNESS, for VocalEssence, and for the Twin Cities at large—sharing your tremendous musical talent so generously with countless artists and grateful audiences!